Caught between the first world’s ever-increasing sophistication of imaging technologies and a third world culture of tech-piracy and make-do aesthetics, the Philippines offers a dynamic entry point to discussions on contemporary photomedia.

Comprising 12 artists stretching two decades and a multiplicity of media, this exhibition moves not only beyond the traditional photographic frame, but frames contemporary Philippine art in a fresh light within the region – and beyond.

As the work was broad in style and context, I curated the exhibition loosely around four cells or themes in order to create connectivity and flow:

Drawn Photography – which looked at how photography is fused with installation in contemporary practice using the drawn line as the meter. Of note was a large wall drawing by CD (Christina Dy) from a source photograph of hair. 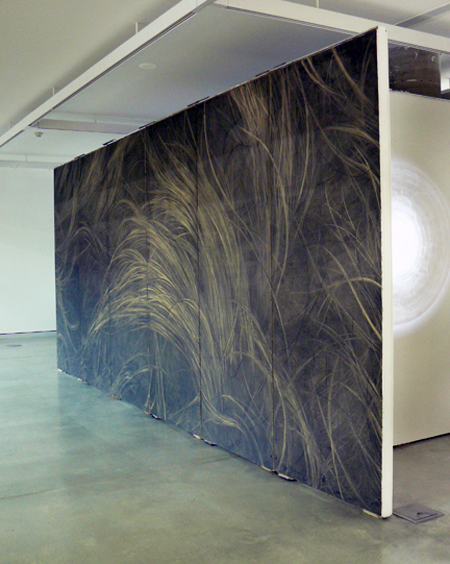 Installation view UTS Gallery of CD’s site-specific wall drawing in charcoal, with Poklong Anading’s single-channel video in rear – a line drawn on a disc as rolled along a street. 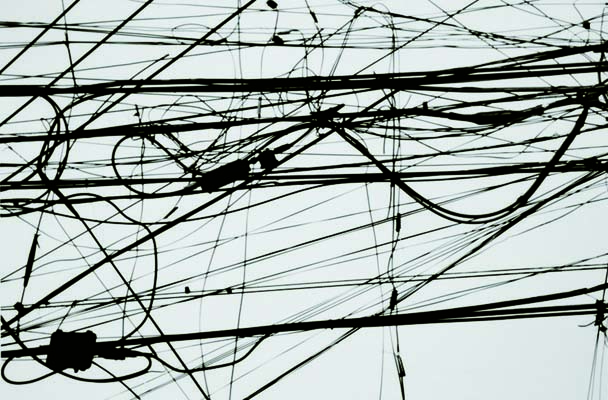 Imaging the Urban – here I turned to the tenet of landscape, however the artists here moved beyond the traditional format engaging collage, aggressive cropping, double-exposure – techniques employed to incite a deeper pathos of place and pace.

Object as Ethos – Intuitive art making is everywhere in the Philippines. In the tradition of found objects, these found images have a history and aesthetic thumbprint. They connect seamlessly with the city as the overlooked detritus of this environment, but also embody their own identity as objects. 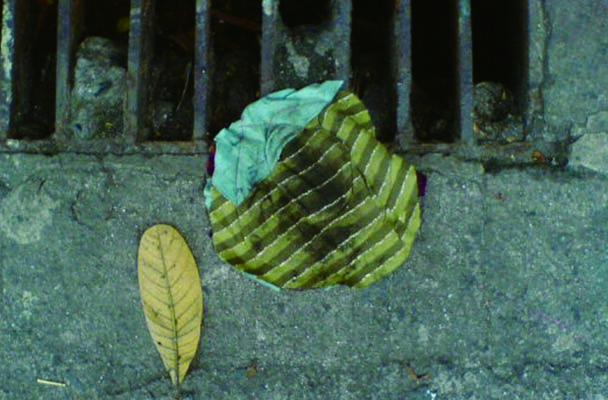 Poklong Anading’s “trapos”; approximately 200-small photographs hung with the flotsam and jetsam with which they were found. 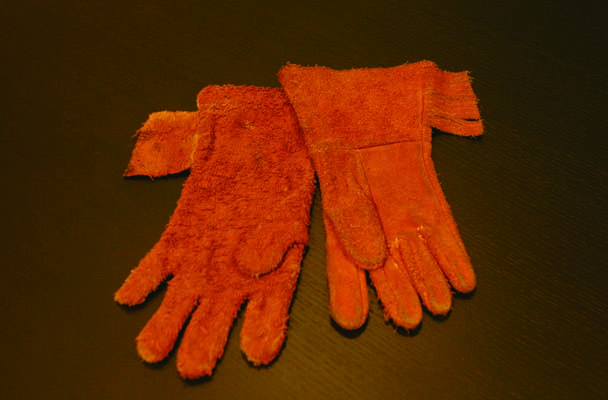 Ringo Bunoan – a found and fabricated object, the pair then photographed within a documentary still-life genre.

Kitsch Myth – Kitsch is ubiquitous to the Philippines. I play on this vernacular through the work of three artists, presented across three adjacent walled rooms within the exhibition: Mario Co’s “Beauty Queens” from the1960-70s; Steve Tirona’s “The Imelda Collection” 2007 and MM Yu’s “X” portraits, the discarded dud portraits from a photographic studio. 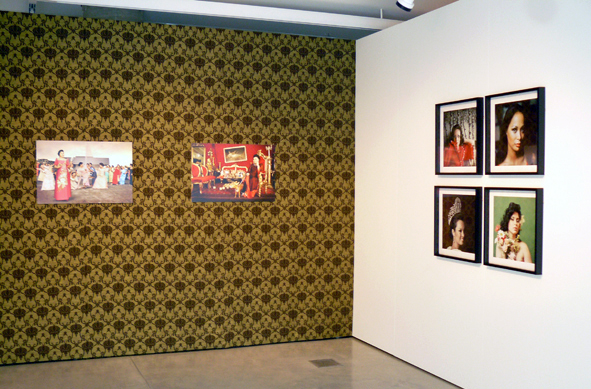 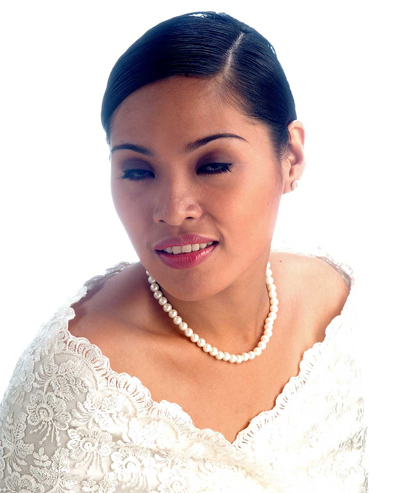 This exhibition was curated for UTS Gallery in Sydney. It then traveled to Bendigo outside of Melboure, where it was shown at the La Trobe University Visual Arts Centre as part of their ongoing exchange with the Ateneo de Manila University in the Philippines.

The following year, the work returned to Manila, where it was reconfigured and expanded upon in a local version of the show, adding extra artists and adjusting the inflection of the show to sit in dialogue with local audiences. 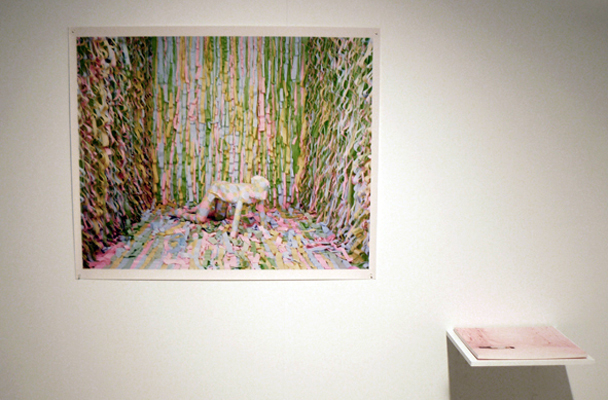 Curator Blair French wrote in 1998, “The final unknowability of anything more coherent than photography’s fragments leads me in search of more points of entry to all the things photography is, and can be.”

As this exhibition’s title suggests, Beyond Frame expands contemporary photography to its many derivatives by juxtaposing photo-based installations and new media alongside historic anchors to the development of photomedia practice within the Philippines. Essentially, it uses that multiplicity French describes to construct a composite picture of a place, now.

Contemporary Philippine photography and photomedia sit outside the timeframe of global trends, despite its astute awareness of the first world’s ever increasing sophistication of imaging technologies and a thirst for all things American. Rather, it has grown out of a culture of third world tech-piracy, of make-do aesthetics and a recent emergence of photography across Southeast Asia that has encouraged the medium to gain a local traction.

It is a foundation that turns to the post-modern notion of the fake and appropriation rather than photography’s traditional understanding as a recorder of ‘the real’. The result is a resonant, refreshing, yet oftentimes, raw look at the Philippines that is quite counter to the socio-political stereotypes we have come to expect. Trying to unpick what has informed the works in this exhibition and how they fit into a lineage of museum photo-art globally rests in these local nuances.

Much has been written about the conceptual framework that bought photography into the forefront of contemporary art dialogue since the late 1970s, ushered by a collapse of traditional media. These were times both turgid and rapidly developing across Southeast Asia and they signpost not only a turning from tradition and governments but also a generational shift. In the Philippines, this trajectory offered a sub-plot of a growing alternative gallery scene, which would ultimately be the first venues for photo-based artworks.

Fast-track forward to the mid-1990s and the climate surrounding contemporary photography internationally witnessed its acceptance within the world’s leading art museums and saw it setting records at auction houses – work such as Cindy Sherman’s psychological portraits, Nan Goldin’s studies of subcultures, Andreas Gursky’s digitally punched-up supermarkets and James Casebere’s constructed photographs fusing architecture, art history and cinematic traditions – these were the images of a closing millennium and reflected the increasing blur between the real and the virtual. They were about a time rather than a place.

The ultimate expression of this idea came in immersive video installation led by the American artist Doug Aitken who converted the gallery space into “a psychological experiment, theatricalizing the universal experience of technological and information overload…” (2.) They captured the zeitgeist and their celebrity endorsed liberation within photo-based mediums that ricocheted and connected with artists internationally.

However, the image projected abroad as what was happening in the Philippines at that time – the mid 1990s – was focused elsewhere. It called, almost exclusively, upon socio-political figuration and nationalistic installations as the definition of contemporary Philippine art heralded by the biennale circuit.

What dominated locally, however, was the pinnacle in an alternative art scene that favoured conceptually-styled multi-media works ushered by artists such as Roberto Chabet, Cesare Syjuco, Gerardo Tan and Filipinos abroad David Medalla and Lani Maestro. It was fuelled by an under 30s set and was more in sync with trends in American contemporary art. Photography continued to remain outside the mainstream and was generally a delivery device for conceptual art works as the vanguard of the day.

Trying to unpick contemporary photography’s acceptance locally is one symptomatic of a lag in shifting psyches more so than a jockeying of genres. If we return to 1967 and the exhibition “5 Photographers”, reputed to be the first photographs presented as ‘art’ in the Philippines and including the work of Mario Co, it has to be noted that despite its early origins this group were primarily photo-journalists and held only two exhibitions. Little changed in the status of photography over the ensuing three-decades. 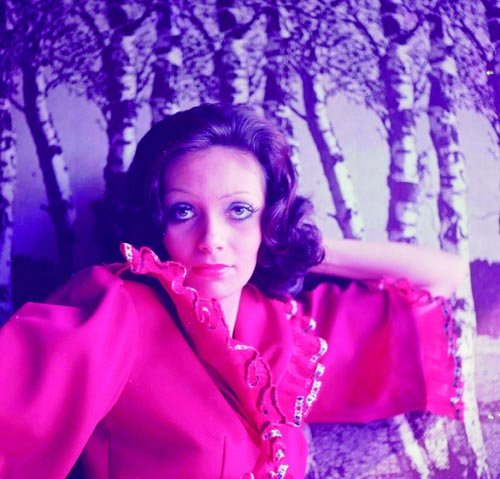 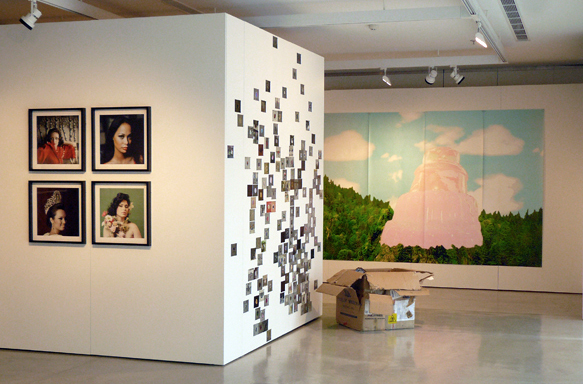 Basically, there was no one championing photography’s development in the Philippines and its international profile prior to the formation of Silverlens Gallery in 2004 and, to date, photomedia and video works are only starting to find their voice within this scene. What that means is the work we are looking at today is based on entirely different foundations than its “Western” contemporaries.

Esteemed Filipino curator Patrick Flores describes Philippine photography as a “post-colonial situation [contesting] the mode through which it has gained recognition as a medium.” (3.) One may ponder his use of ‘post-colonial’ in the context of the work by the twelve artists in Beyond Frame. Is it the colonial arrogance of biennales defining Filipino art, or the American defining of ‘contemporary photography’ and a global appropriation of its ‘style’, or is it a more literal political unshackling that Flores alludes to: a post-colonial Philippines that looks beyond US-alliances in a search for its own voice through the view-finder? 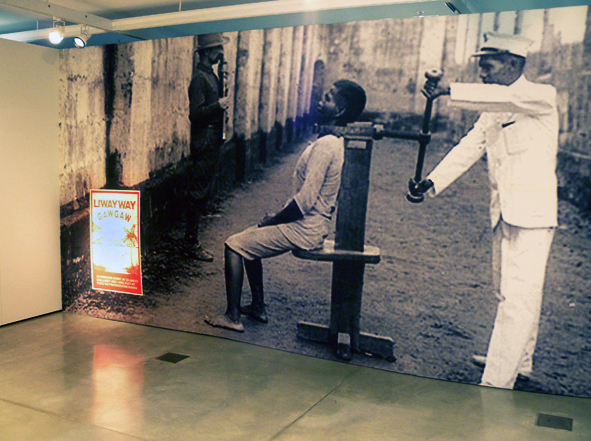 This is the platform that Beyond Frame presents. It is perhaps most obvious in the powerful work of Norberto Roldan, “White Love, Love White” (2003), or more subtly in Steve Tirona’s “The Imelda Collection” (2006). What this exhibition endeavours is to connect works across its breadth through a series of mini-themes: ‘Drawn Photography’, ‘Imaging the Urban’ and ‘Constructed Myth and Identity’, ideas that allow the telling of a story to re-emerge from different vantage points over time. 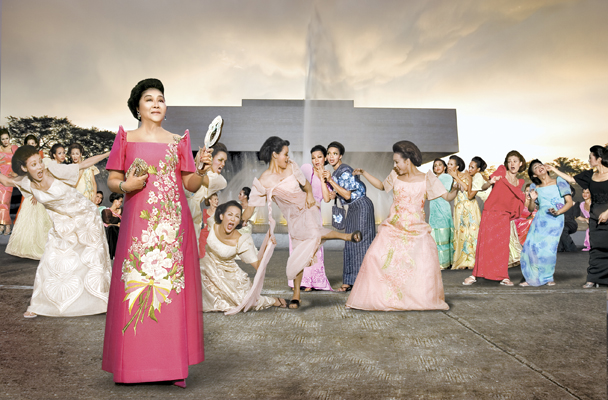 For example Mario Co’s beauty queens taken during Martial Law are juxtaposed with Tirona’s advertising images of Madam Marcos as the epitome of aspirational glamour. When placed in the same exhibition as Lani Maestro’s “A voice remembers nothing” (1994), the poignant video-diptych of the whispered names of people who went missing during the Marcos Regime, metaphorically washed away on the tide, the threads across this exhibition take on a greater voice. 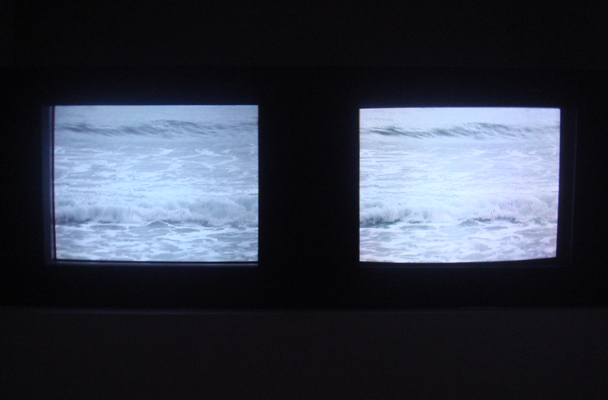 Lani Maestro A voice remembers nothing; courtesy the artist and The Institute d’art Contemporain [IAC] France

Similarly, how photography is fused with installation in contemporary art can be traced through the drawn line from Poklong Anading’s hypnotic DVD-projection of a graphite line on a spinning wheel, to Christina Dy’s photographs of hair as steroid sized wall-drawings, to Rachel Rillo’s cropped photographs of gnarled overhead wires and Ringo Bunoan’s minimal line of books titled “Stream”, a floor-piece deeply influenced by Maestro’s aforementioned video. They are all conceptual translations of a spatial-psychological dialogue with a city – our memories, our aspirations and how we image ourselves. 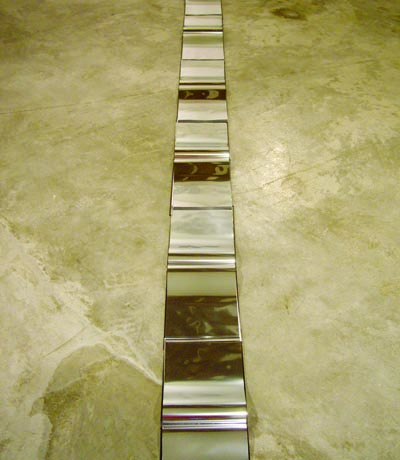 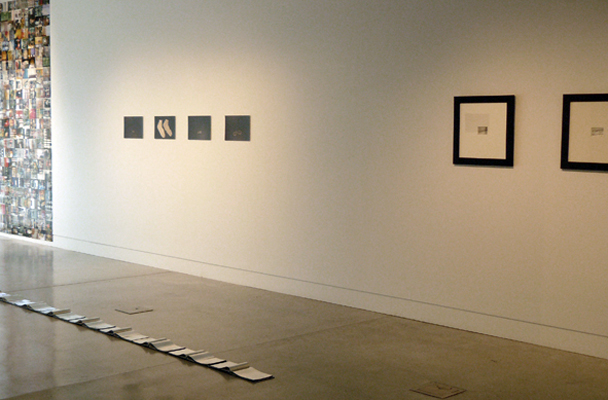 Add Gerardo Tan’s “Skateboard Drawing” (2008) to the mix and it underlines this muddy territory out of which Philippine photomedia has blossomed. How far really is Tan’s installation from his seminal work, “Code” (1998), a grid of hundreds of photographs of objects that act as a conduits between people, and play with notions of representation, the real and the fake. A decade apart, both works remain in the realm of documentation and primarily speak of a spatial engagement using photography/photomedia merely as a delivered device for a ‘concept’.

This timelessness and stretch across generations was important for me in presenting a picture of Philippine photomedia. Beyond Frame had to map that trajectory, its history and its layered or fractured personas, rather than present a finite picture of an art scene now. It deliberately pits contrasting aesthetic orientations and traditional frames: portraiture, landscape, still life and documentation in order to broaden definitions of photography within the Philippines. To do so it calls on the realms of peripheral medias – banner-art and advertising, found negatives, collage, flawed studio images, double exposure, video and the most extreme photo-derivative, the centrepiece wall-drawing by Dy. Collectively, it describes that fragmentation Blair French described in his opening quote.

While Co, Maestro, Roldan and Tan form the historical foundations to Beyond Frame and path its development to its current manifestations, it is the work of photographers Lena Cobangbang, Gina Osterloh, MM Yu and cross-platform artist Poklong Anading that define its future. It is about the pace and pause of a city, of technology, improvisation, translation and contemporary realities that sit beyond the frames of definition.