A week on the road traversing New Mexico, from its Texan border to just beyond the reaches of Colorado in the north, the flatness of this landscape is punctuated by the most wonderful history of signs. While I am far from a photographer, these a like “lens candy” – you just want to snap them against the huge open dramatic skies that define this landscape. They also capture a sense of the social history of this place with its layered histories of mining and affluent fly in workers preferring to stay at the “newer” hotels. The 2014 statistic for people living in New Mexico below the poverty level is 21.9%, with the minimum wage at just $7.50. While you get a sense of this intersection of needs, aspirations, failings and imbalances, there are two overriding impressions that kind of sink into your very being as you move across this landscape: one is the raw beauty of this place, scars and all, and the other is the lightness of this community. They don’t seem to shoulder blame or tensions towards this “import industry”, but rather were incredibly welcoming. 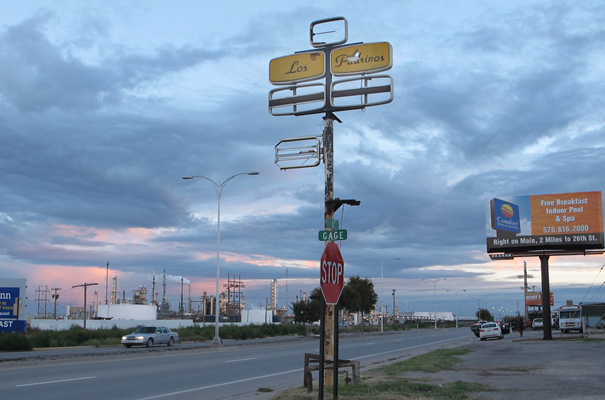 This is in Artesia where we stayed, in the background a refinery. Artesia is surrounded by oil wells – their persistent nodding pumps seeming “pecking” the ground like vultures scoring their take. 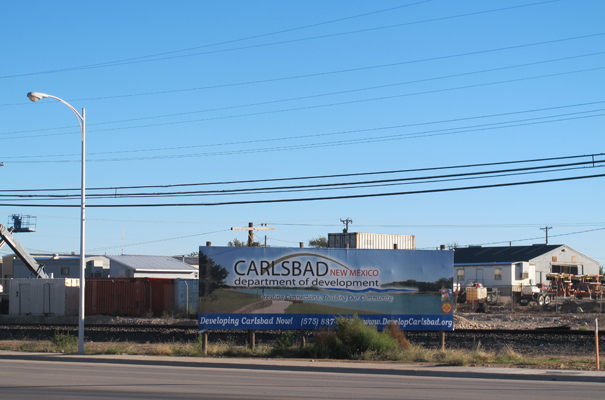 This aspirational sign coming into Carlsbad shows lush green lawns and a peaceful lake – it is the antithesis of its reality – a town surrounded by oil mines, potash mining, gas and fracking, and WIPP – the Nuclear Waste Isolation Plant on its outskirts. 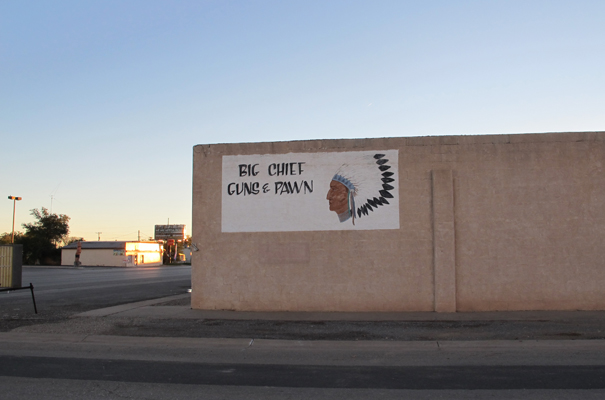 Big Chief Guns & Pawn – how could you not love this handpainted sign in downtown Artesia. 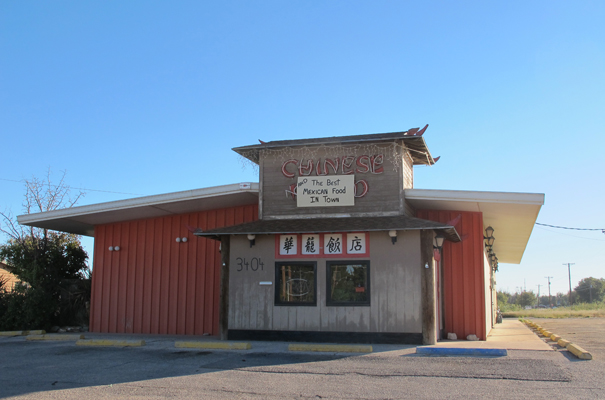 Clearly a change in menu but not a change in signage. Chinese Food has been covered with “The Best Mexican Food in Town”. (Carlsbad) 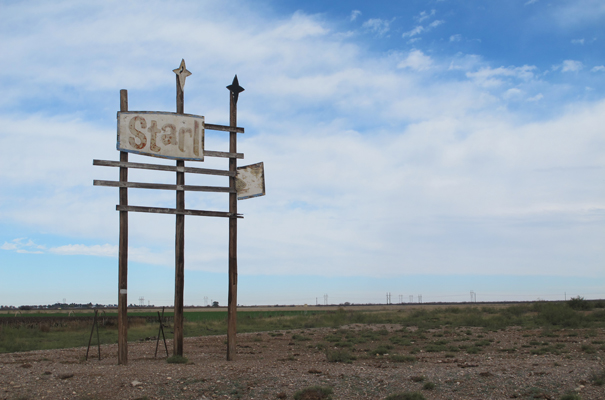 This sign for the Starlite hotel was found on the outskirts of Artesia. The hotel’s sign (top) stands in front of the hotel. Interesting this route was obviously more of funnel for customers in the past, now abandoned as this stretch to the east of Artesia is mainly oil and gas fields. 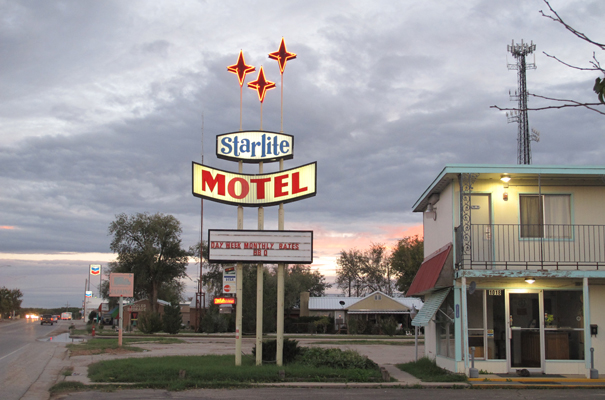 It looks a little better at twilight. 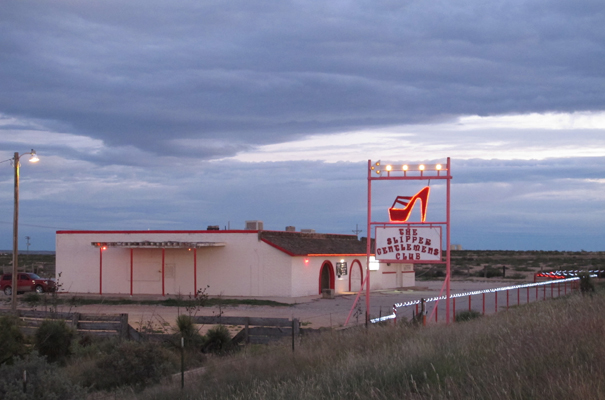 On either edge of Artesia – I am suspecting beyond the town’s limits – were two venues catering to other needs. This is on the Carlsbad side (south) – The Red Slipper Gentleman’s Club which advertised “sexy ladies” – while on the north side towards Rosewell was a bessa-block structure void of windows and the banal signage Adult Video. At least the Red Slipper has a bit of panache! 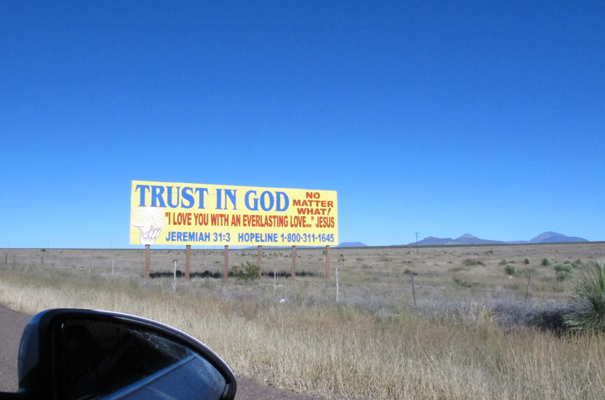 Counter to this one finds billboards with an evangelistic tone. This feels like Christian country; I have never seen so many decorated crosses for sale, and most places don’t serve alcohol.  Trust – no matter what! 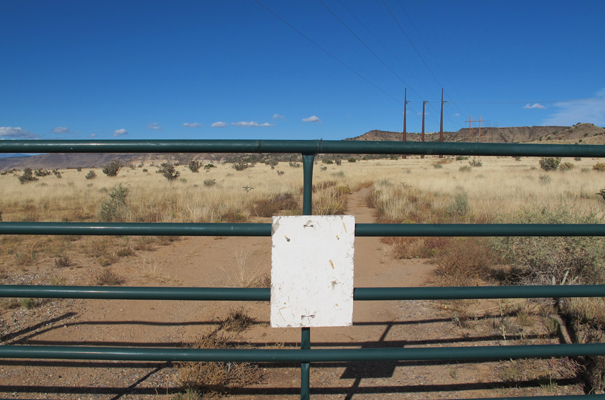 I think it says no trespassing? This was found along a turn off from the main highway not far out of Los Alamos in the north of New Mexico and fenced off Indian land. What this photo doesn’t capture is the stunning landscape that surrounded this informative sign. 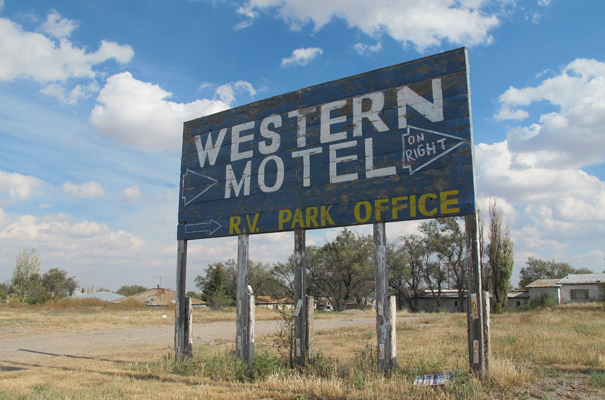 The next few images are from Vaughn – practically a ghost town half way between Roswell and Santa Fe. Driving through in the day is was peppered by abandoned buildings, but returning at night there seemed to be a healthy business amongst the roadside motels – I would hardly call it a thriving hub – but it was clutching onto the last glimmers of life. In some ways it speaks of the resilience that is inherent to New Mexico. 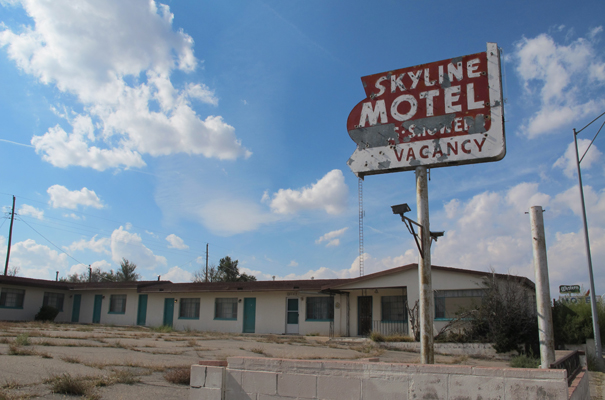 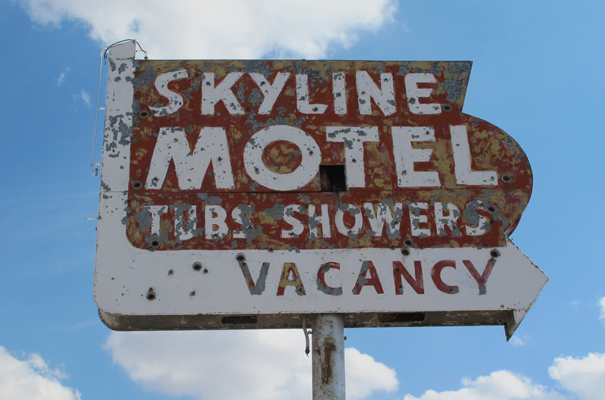