Nick Mitzevich has quadrupled philanthropy and increased attendances by 30% at the Art Gallery of South Australia so what’s left for the encore?

Mitzevich was appointed Director of the Art Gallery of South Australia (AGSA) in 2000 and in June, his five-year contract comes up for renewal.

Under his directorship attendance has risen 30% (last year recorded at just under 700,000), the gallery’s benefaction has gone up 400%, philanthropy alone increasing 100%, kids and family programming is a new stream of giving and is funded 100% by individuals, and volunteers have shot up to 285, a staggering number for a museum of this size.

They are outstanding statistics that have attracted national interest, and speculation over Mitzevich’s next step. However, regardless of how dynamic an institution’s director may be, it is impossible to sustain growth at that rate.

ArtsHub sat down with Mitzevich to reflect on why AGSA’s model has been so successful and to ask what next?

‘The first five years for me was about quick wins and assessing the organisation and seeing where we could grow things – to reshape the gallery.You can’t continue that as the quick wins dry up.’

The next five years will be much more strategic, structural – it is about physical changes and structural adjustment, and that in a way for me feels like a new job,’ said Mitzevich.

For Mitzevich this second phase is all about “the big S’s”: staffing, storage, strategic planning, shop, and addressing structure.

‘In my first five years I made very little changes to the staffing and I did that purposefully because I needed to harness everything that I had – I couldn’t let anything go. Second phase we will be assessing positions as they become vacant and adding some new ones.’

When pushed on staffing cuts, Mitzevich replied: ‘The Assistant Director doesn’t replace anything. It is about supporting me to amplify our approach to the artistic program and to make sure staffing realigns with where we are going.’

Mitzevich is currently working with his Board on a new strategic plan for AGSA, part of which will also address the storage of the galleries 60,000 strong collection, the second largest in a state gallery in Australia.

Addressing whispers that Mitzevich was looking for new sites, he told ArtsHub: ‘We are very interested in increasing our footprint, but we know from a prudent financial perspective we can not afford to be much bigger.

‘I am interested in sustainability. I have to be careful how big we dream.’

‘We are constrained on this site; locked in by heritage buildings. In the medium term, a second site is very appealing to us and it is something we have been quite publicly pursuing. We are working on a project at the moment to reimage our collection storage,’ confirmed Mitzevich.

But as with all approaches to collection and display, Mitzevich tends to think outside the box. While he admits he doesn’t have the answer yet, he said convincingly: ‘I want to kill off the idea of a storage facility. The ideal museum of the future isn’t a storehouse and it isn’t a showroom; it is lots of different ways you can choose to interact.’

‘We are very much an advocate of open storage. We describe it as an art discovery concept having the ability for the visitor to experience works that are not in an exhibition context. We have developed a Masterplan about how our storage can morph into something that takes you back to the original things like access and education. It’s not a storage facility, but just a different way of viewing art. That will be an import part of next five years,’ said Mitzevich.

While Mitzevich is on the hunt for an appropriate site and model, he is also currently undertaking a major review of the galleries retail facilities and is starting to think about a rehang of their Australian Galleries, which three years ago got the museum sector talking when Mitzevich and his team decided to hang their galleries by theme rather than chronologically.

‘We don’t have a contemporary space here any more. It happens everywhere; it happens where it is appropriate. I want people who love historical work to realise that artists have always made things and they will continued to make whether in the 15th century or the 21st century I want to blur that boundary.’

‘We are trying to craft a really unique place that is memorable. When you walk through our Australian and European Galleries we create a certain sense of energy and curiosity. How do we harness that for other parts of our business?’ asked Mitzevich rhetorically. He pointed to QAGOMA as an inspiring and successful model noting that the gallery shop was, ‘a very earnest extension of the image of the gallery.’

‘I am not interested in playing I’m better or we’re better. We are not on the eastern seaboard; we are on the edge of something else and we can run our own race,’ said Mitzevich. ‘Adelaide is boutique!’

‘We have a really dynamic board that wants to move ahead. When they hired me they said they wanted a change agent that would take everyone with them, and I have tried to really embody that…The board and I agree success is your best argument. While we have very earnest arguments why art is so important, the most potent one is success.’

It is an argument – along with those stellar statistics – that Mitzevich will use to grease the way for future change; arguably this next stage a little more challenging than the last.

‘You have to be ambitious how you interact with a city, with the culture in the country, and your audience. Australian art needs people to be ambitious. Our cities deserve people in positions of privilege, like this, to be ambitious. We owe it to the people who support us – government and private individuals – we owe it to them to be progressive,’ said Mitzevich, who added with a laugh, ‘You know I love the word popular – there is nothing wrong with being popular.’

One of the more ambitious or ballsy moves by Mitzevich during his tenure has been his Director’s Project, a circle of benefactors that contribute to the commissioning of a new work each year with the modus operandi of placing total faith in their director, only learning what their cold hard cash has been spent on when the artwork is unveiled. 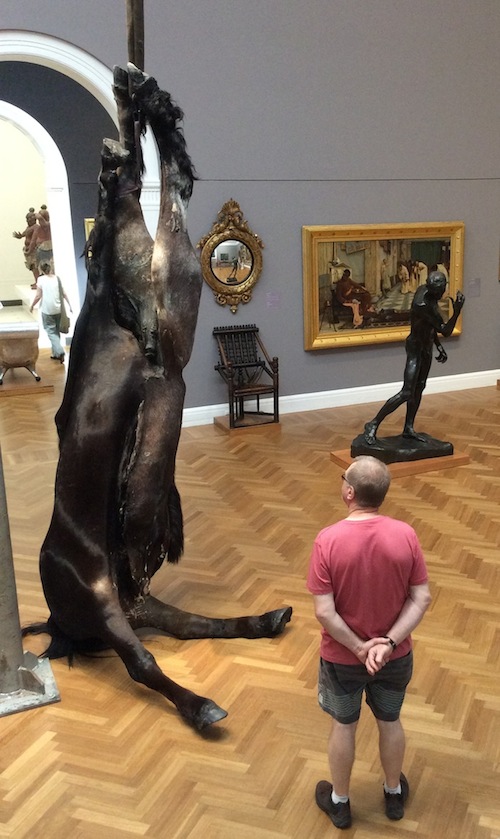 Berlinde De Bruyckere’s confronting sculpture of a horse stops audiences in their tracks, embedded with mixed hang is expands the way we thing of contemporary art as a lineage of narratives; photo ArtsHub.

The first was a large scale video work by Russian group AES+F (traditionally not an area collected by the gallery); the second was the $300,000 confronting sculpture called We are all flesh by Belgian artist Berlinde De Bruyckere, and third Alex Seton’s 28 marble lifejackets Someone died trying to have a life like mine tacking the current topic of asylum seekers. All three supported ambitious moments in the artists’ careers and have become iconic contemporary works in the collection. 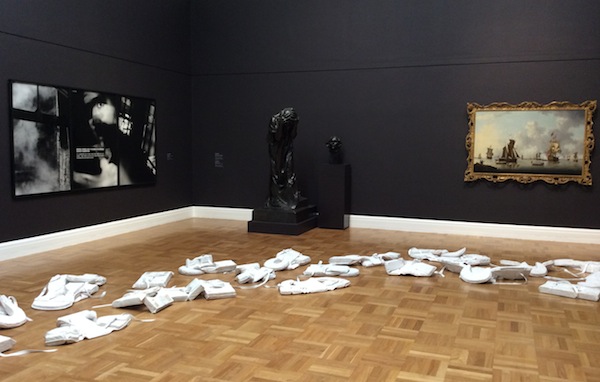 4.5 tonnes of marble was used by Seton to make this flotilla of life jackets in comment to “unscheduled arrivals” to Australia, the most ambitious work of his career enable through commission ​by Mitzevich’s Director’s Project; photo ArtsHub.

‘The Director’s Project is not a whim, but a deep-seated strategic aim for us. I like to gestate them slowly because I want them to be really ingrained into the institution. Again, it is about keeping it exciting and interesting and subscribing to that vision of the gallery to support living artists…I have been very fortunate that private giving has been a hallmark of this institution.

Mitzevich is currently “developing” the next project, which given the track record, will be another defining acquisition under his tenure (launched early 2016).

Collaboration is also central to the next phase of the Gallery, the timing of TARNANTHI, the inaugural Festival of Contemporary Aboriginal and Torres Strait Islander Art (8-18 October), perfectly sitting in that next chapter for Mitzevich as another potential success story attributed under his reign.

‘We received a $4 million grant from BHP – the Premier wanted this project to happen so he asked BHP for the money. We are presenting it on behalf of the Premier and we wanted to work with as many people as we possibly could,’ said Mitzevich.

Bridging 19 partners across 13 venues, this project has wider social ramifications about the support of living artists and growing awareness and education of ATSI art.

‘This is a small city and we have to help each other. I don’t want a fortress amongst a village – our key success is about everyone else’s and we want to grow the way we can share and amplify our audience. More collaboration is definitely part of the future,’ asserted Mitzevich.

‘Great thing about Adelaide is that it is small enough to be agile,’ he added. ‘I love the parallel nature of both control and respectability and the kind of unpredictability of things under the surface (here in Adelaide), so I am trying to tease both out at the same time and it is slightly schizophrenic but that is what I love about that energy when you rub them both up against each other – you get something unexpected and that is what we are trying to tap into here.’

‘I want the AGSA to be memorable and we want to do that organically. We don’t want to say today we have turned on the switch and we are a destination. It is about the accumulation of things – I am just responding to our history, the architecture and the collection and our audience.’

Mitzevich attributes the success of his management model to lessons his father taught him as his apprentice farmer.

‘The thing about this job is you need discipline. My parents were farmers and they taught me about structure and that you have to be ready for the unpredictable.’ He continued with a smile, ‘You have to be kind the animals and the environment; you can’t bite the hand that feeds you; you have to give them love as love reaps abundance; you have to be agile to opportunities and you have to manage money prudently.’

So perhaps Mitzevich’s lesson for success is a simple one after all.