What is driving the rediscovery of ceramics, their renewed collectability and place in the museum environment?

It is not surprising as part of this year’s Art Month Sydney, ceramics was going to be a topic of discussion. The festival’s artistic Director Glenn Barkley, who has recently come to the medium himself as an artist and is a member of the Claypool studio collective, openly admitted that his curatorial position allowed him to indulge his interests.

But Barkley is not alone; he is merely part of a zeitgeist surrounding contemporary ceramic practice that questions what place it might hold outside the more traditional art / craft debate.

‘Ceramics is a medium that constantly has one eye on the past whilst looking forward to new forms, techniques and processes developing in the present,’ says Barkley of the exhibition Turn, Turn, Turn: The Ceramic Studio, which he has curated for the NAS Gallery (5 June – 8 August) and acknowledges the history of teaching ceramics over the past 50 years.

He added that enrolments this year in UNSW Art & Design’s ceramics course were ‘through the roof’, as were those at the National Art School.

With the Shepparton Art Museum (SAM) announcing this week five artists shortlisted for its $50,000 Sidney Myer Fund Australian Ceramic Award, drawn from over 100 entries and including the commissioning of new work, and the Clunes Ceramic Award, offered in partnership with the Art Gallery of Ballarat and the Castlemaine Art Gallery and Historical Museum, has called for entries this month for its acquisitive award, the place – and indeed endorsement – of ceramics as a contemporary viable material within our institutions is also challenged?

What is driving this renewed popularity? It was a question posed to a panel of practitioners over Art Month Sydney – Lynda Draper, Merran Esson, Brett Stone and Emily Hunt..

‘I think today artists aren’t afraid of being uncool,’ said Hunt. ‘If it’s edgy they want to make it their own and working with clay is such a freeing space. It contains personalities and I think that is why people want to own ceramics. Artists are responding to that and are not afraid to be crafty right now.’

Draper agreed adding that when she went to art school everyone was so serious. ‘I think the younger artists are a bit more open-minded at the moment and it just seems to be that something has fallen away, and they are relaxed about collaborating and nurturing each other.’

‘Maybe it’s got something to do with the times we are under with a lot of studios closing down, the education system is getting condensed and cut backs – maybe people are starting to realise what they are loosing,’ Draper pondered.

Brett Stone, who has worked with dealer Rex Irwin for many years, said: ‘What we have seen in the last ten years is the rise of modern urban eclectic collector.’ Irwin has been showing ceramics, predominantly functional wear, since the late 1990s influencing Stone’s own practice.

‘I took a bowl as a present to (art dealer) Damien Minton one day and he offered me a show. It sold out within an hour and I thought “Goodness this is not as hard as selling all the artists I work with.”

‘I think a lot of artists of the younger generation are making things that they want to have. If you look up design files, everyone today has a 60s sideboard, a 70s ceramic, a piece of glass and there’s something tribal…They want these objects. They are trying to chase the lost hill tribes of Erskinville (he joked). They are trying to collect something that no one else has,’ reasoned Stone.

Esson agreed, a potter who took up the medium in the 1970s in the wake of the Bendigo Pottery Studio, thinking that she would be making bread crocks and wine coolers.

‘I learnt really quickly I wasn’t a production thrower. I didn’t want to put in the 10,000 hours to learn the skill. I learnt quickly there were a lot of other things to do. I wanted to make things that were more sculptural, playful,’ said Esson, who heads us NAS ceramics department today and nurtures experimentation in the medium.

Draper, who has been pivotal in expanding definitions of the medium through the program at TAFE Gymea, recently created a residency program that invited an established artist to come and work in clay.

‘Many of them had never touched clay before. I was really interested in how they would interpret the material and how it would cross over to more traditional ways of working with ceramics. And then Hazelhurst (Gallery) showed the work that came out of the residency last year in a show called Glazed Confused,’ said

Draper added that a lot of younger people coming to the program had arts backgrounds and were looking to introduce ceramics as part of their practice. Ceramics have clearly shaken off the crafty tag. 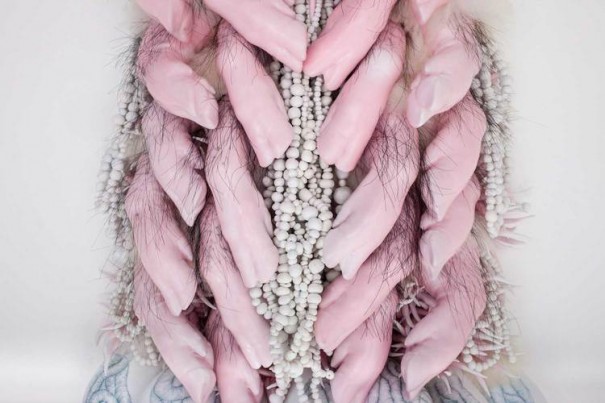 Juz Kitson’s work Embrace (detail) who will be presented in Turn, Turn, Turn: The Ceramic Studio and is currently in the Redlands Prize, both at NAS Gallery. Image courtesy the artist and GAGPROJECTS/ Greenaway Art Gallery © the artist. Photograph: Brett East

‘If you work in a certain way, and show at a certain gallery, you get to be contemporary,’ said Barkley. ‘But if you see ceramics at the NGA (National Gallery of Australia) they are in a glass box, a cabinet in the corner. I long for the day when they will be realased from their cabinet.’

While institutions like the Museum of Contemporary Art Australia (MCA) have witnessed contemporary ceramic installations, such as Emily Hunt and Juz Kitzon’s work in their annual Primavera exhibition defining contemporary practice now, and in regional galleries, as mentioned Hazelhurst among others, the take-up of our state institutions has been less forthcoming.

Stone said: ‘The big house on the hill (meaning the AGNSW) doesn’t collect ceramics. It has a huge wall around it saying “Ceramic art piss off”, unless you are Chinese or dead for at least 500 years.’

‘They would put up a Rosalie Gascoigne where 20 ceramic jugs from tip in Canberra are put on shelf, but would not collect a Gwyn Hanssen Pigott where she made the jugs herself,’ continued Stone. ‘I think in this city, in particular, they will say it is the powerhouse’s job. But it has taken down its ceramic collection. So the only place can see a permanent collection is at the Manly Gallery and they are punching above their weight. It’s a great stumbling block.’

The audience and panel were equally vocal that now was the time to push for change, using the traction of popularity around the medium and its enlivened vitality as a creative medium.

‘Now is the time to start writing letters to the new director and say “what about it?”’ encouraged Stone.

Esson added: ‘It is the role of curators to step outside the familiar and to explore what is going on.’

This is happening in other areas of collecting also. It was noted that ceramic artists such as Marea Gazzard and Janet Mansfield were pioneers in pushing the boundaries and definitions of the medium beyond its crafty weight. This torch has been picked up and carried by a new generation of artists such as Hunt, Kitson, Esson, Penny Byrne and the list rolls on.

And these new ceramics are collectable, very collectable. We need to understand what it is about contemporary art that makes ceramics hot; and visa versa. While the medium can carry this historical and conceptual frame it is most elementally process driven. And that, today is the new black.

‘In this Ikea-world where everyone has the same dinner set called ergon…to actually own something that is unique is special. I don’t want ceramics to become is the version of the annoying “show pillow”. I have been to houses where people have beautiful usable ceramics on their dining table and they taken them off and then put the cheap stuff on to use,’ said Stone.

Esson shared this need for us to champion ceramics as part of our everyday. ‘I talk about the intimacy of ceramics – that first cup of tea you make in the morning and what cup you choose – the intimacy of putting a meal on the table.’

It is now up to us to ensure this is not a flash and burn moment. This wave can grow and it will only grow if we understand why it is growing. The groundswell has to come from making good work.

This article was first published on ArtsHub 9 April 2015.