Textile art is back bolder and more conceptually-driven than ever before, challenging definitions of material and practice.

Textile art is one of the oldest art forms in existence but Group Exchange, the second edition of the Tamworth Textile Triennial, shows it is also at the cutting edge, interacting with technology to produce new takes a million miles from old-style fibre art.

Curator of the 2nd Tamworth Textile Triennial, Cecilia Heffer, who is the Senior Lecturer Textiles at the University of Technology Sydney, said the changes to the medium are taking audiences by surprise.

‘There is a development away from the craft of textile and fibre arts, and pushing textiles into disciplines or areas that are quite challenging, and sometimes that is met with confusion…I think things are changing. You see a lot of exhibitions stating to incorporate textiles, for example last year’s Biennale of Sydney at Cockatoo Island we saw a lot of textile, and then there is this whole resurgence of making at the moment.’

Those contemporary drivers became apparent to Heffer in selecting the work, and the kind of zeitgist or shift within the area of textile practice. ‘In the first cull we took about 135 artists and then we chose 22 artists. In looking at that selection you can really see what is concerning artists around Australia. In terms of making, most of these artists are very accomplished so they have got to a place where the conceptual underpinning is what is really driving them.’

‘Sustainability is still a high driver and concern for the environment, but there is an interesting shift in this relationship between textile and social media, if you like, and textiles and the digital,’ continued Heffer.

Her case in point was the work of artist Jemima Parker who has sourced her pattern making from YouTube. ‘She is pushing pattern making and went on to YouTube to learn these complex techniques. That is an influence we are seeing from a younger generation of makers using the information available to them is online,’ Heffer continued, ‘and things like Instagram have a huge impact on making. A lot of these artist have up to 4,000 followers. It is not as thought they have this autonomous studio anymore.’

Central to Heffer’s exhibition – which Parker’s sculptural pieces explore in a more oblique way – is the role of collaboration.

‘Collaboration was the premise for the show. I asked the artists to break out of their pattern practice. What would happen if they chose to work different, with someone from another discipline, or to explore a cross-pollination of ideas?,’ asked Heffer.

Rather than flying all over the place to do studio visits as curator, Heffer again flipped the triennial model on its head and used the funding to bring all the artists together in a playful experiment. In July 2013 ​they flew Tamworth to meet and workshop what collaboration can mean for their practice as artists.

YouTube: Heffer speaks of the pivotal role that collaboration played in this triennial, moving out of traditional frame of festival exhibitions and textile traditions. Published by Tamworth Regional Gallery.

The result is this phenomenal push and extension through the exhibition and kind of building of confidence within its practioners. Perception has always been a strong barrier for textile art – to push beyond the “craft gate”.

Heffer said: ‘Someone like Anita Larkin, who is known as a felt maker, really extended her practice and designed this instrument which is an exquisite aesthetic piece but can’t work unless there is collaboration with musicians; unless there is an exchange of breath.’

Titled The Breath Between Us it is perhaps the most extreme work in the show if we leap from traditional perceptions, but then at its core is an age-old craft that is dying; Larkin’s artmaking and workshops passing on those skills.

YouTube: Anita Larkin speaks about the making of The Breath Between Us.

This energy for reinventing the medium stretches the generational divide. Another artist turning to technology in the exhibition is Gillian Lavery, who has presented a stop motion animation of her work, hung as a diptych. Sitting with the University of Technology, where cutting edge design using technology is the status quo, it is an interesting place to “update” those old dusty perceptions. Could textile art be on the edge of a new rise of cool, like we have been witnessing with ceramics in recent years. 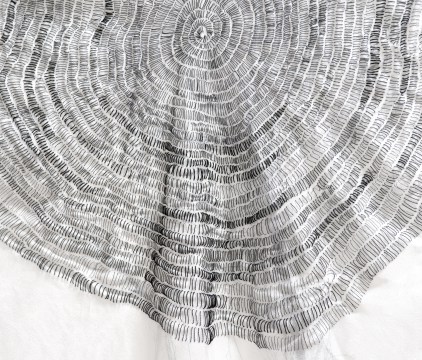 Speaking of those challenges Heffer said: ‘You look at a lot of these works and it is the same old argument that they could easily stand in an art gallery – which they are today! – but the old fashion preconceptions that textile art is fibre art remains a challenge. How do you shift that? Shows like this – that was my intention. In Europe and Japan it is just not an issue especially. In Japan this divide between art and craft just doesn’t exist.’

Heffer continued that the other great challenge we face for the future of textile art is to sustain the skills and knowledge base. ‘The skills in the show are exceptional so how do you pass those skills on? At a university level they need to be implemented in programming, and guilds need to be celebrated. Sustaining that passion is very important.’

Mandy Gunn is an artist who has sustained that passion, the most senior and experienced in the triennial. He works is testament to the reinvention and re-invigoration of textiles as an art form, and the ability to translate fibre into new expressions. Her work uses traditional weaving patterns which she has translated into 3-dimensional cardboard structures, which are surfaced with shopping bags from Tiffany to Target, sustaining the same visual language and message across the textile tradition. 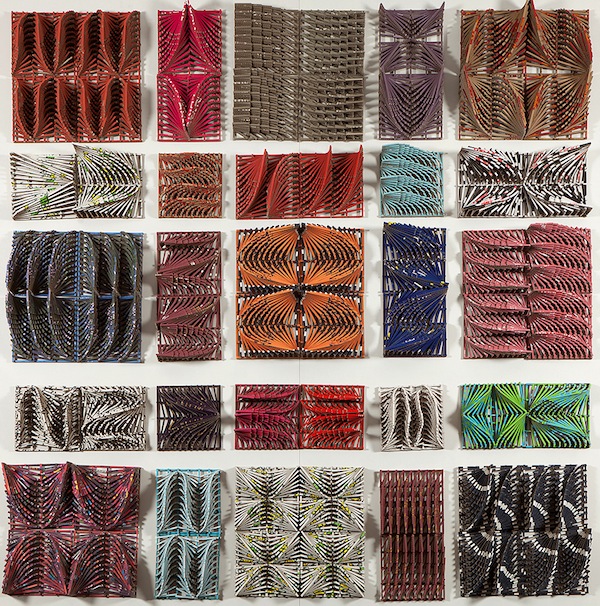 While the exhibition is cross-generational, with artists ranging from their early 20s to early 70s, it is still skewed in terms of gender – not for lack of want of shifting that imbalance.

Tim Greshman is one of two gents in the exhibition, and has taken collaboration as a very quiet reflection cross-pollinating between photography and tapestry, a technique he has stuck with for many years. 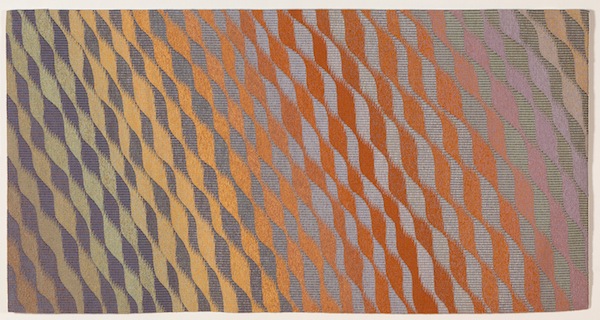 Heffer said that one of the highlights working on the triennial has been meeting some of the ladies who started the exhibition in ladies in 1975. ‘A group of women in Tamworth who got together in a shed just wanted to show their textiles, and from that it grew to what it is today. I was a real privilege. And what was really nice was that she was so happy with the direction it had taken,’ said Heffer.

The 2nd Tamworth Textile Triennial remains on show at UTS Gallery until 14 May, then it tours to the Town Hall Gallery in Melbourne (6 June – 26 July) with a Symposium at RMIT Melbourne on 24 July; then travelling to South Australia, ACT and regional NSW.

Top image: Anita Larkin whose work The Breath Between Us (2014) wells from her background as a sculptor and felt-maker, and challenges the conventional definitions of textile art in this triennial; Photo Pedro Altuna; supplied courtesy the artist.