SAMAG tackles the topic on everybody’s list – what are the trends in digital engagement and how do we nab those virtual audiences?

Public engagement today means just about everything.We can no longer ignore the need to integrate digital technologies and virtual audiences into our overall strategic operations. It’s simply time to ‘reimagine what the organisation is’, said Michael Parry, Director Public Engagement for the Powerhouse Museum, and one of the panelists at this week’s SAMAG lecture on Virtual Audiences.

Parry, who described himself as a ‘failed software engineer’, said his turning point was when he realised that, ‘I could not only talk geek but I could also talk this strange language called museum.’

Both Parry and Gabby Shaw, the Museum of Contemporary Art Australia’s (MCA) Digital Media Manager come from a digital broadcasting background, demonstrates how arts organisations today are recognising the need to bring in specialist staff who will start to embed technology within the organisational culture.

It was further illustrated by panelist Alex Cameron-Fraser whose role with the Australian Chamber Orchestra (ACO) shifted overnight from Public Relations Manager to Strategic Development Manager. What might just sound like letters on a door rather is a signal to better align digital initiatives right across sector to funding, artistic direction and strategic development.

The company launched last year ACO Virtual, an immersive interactive engagement with the orchestra via a touchscreen and green screen projects developed with Mod Productions, which they are touring regionally. Cameron-Fraser said, ‘It is very much a piece of the main program.’

While this is more a digital experience, the SAMAG panel attempted to navigate this vast world of what the virtual audience might mean – from the ACOs example to the MCAs use of apps and video conference via its National Centre for Creative Learning (NCCL) to discussions about back-end technology and future financial spin-offs siting MoMA in New York and MONA in Tasmania.

Navigating the panel through this layered discussion CEO of the digital company The NEST, Stuart Buchanan, reminded that, ‘We are at the end of the beginning’. He added, ‘All of us now have a very good understanding about how these channels, apps, facebook or whatever, work but not how they work for us.’

This is our next challenge as cultural professionals.

Parry raised the vital point, that part of what we are fronted with is this idea of virtual audiences. ‘I don’t know who they are. What I do know is audiences. We have been using digital technologies for a really long time in museums,’ he said, citing 1950s examples of the audio guides. 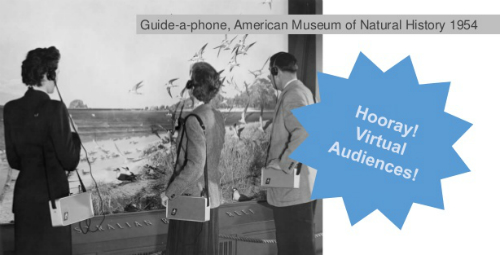 Over that half-century – yes we thought virtual audiences was a new thing – a lot of good ideas have become outdated or junked. ‘A lot of institutions have made a series of brand apps that get looked at or downloaded maybe once’ said Parry. One of the problems is ‘we don’t know what to do with them and how to put them to bed.’ How do we move forward? 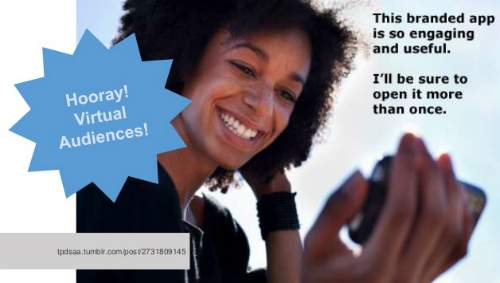 Parry reminded us that it doesn’t have to be overly complicated. He said, ‘Digital audience are just audiences. We just want to make versions of the stuff we already do.’ We want to stay current and tapped into what interests our audiences and today that includes what devices and platforms they are using.

He added, ‘Think of it this way – if you take your building away do they still have a notion of what you do, and who you are?’ Parry said the reason he knew half the world arts institutions was not from visiting them, but from following their online platforms. Sound familiar? How many times have you visited the TATE this year?

‘It means that if one of my friend says I am going to X, I can say “you have to go to this place the stuff they are doing is amazing”. Reputation is the thing that is what we have to target’, said Parry.

Approaches: multi-layered or focused? How best to use our resources?

One such question raised was: ‘We are moving away from a sort of multi channel approach, whereby we say same thing through diff channels, into this idea of transmitting. How do we tell the story of what we do across all channels so that when a visitor engages one of these channels it is a cohesive extension to our in-house programing?’

Parry answered that, ‘the underlying principles of what you are trying to convey are the same as in-museum. It is simply an idea you have in a new way.’

‘Having tried both, my advice is to know the experience you are tying to create and choose the platforms you need to do that.’ Parry added, ‘That may involve you building a new platform sometimes, but remember you have just built another product so you are going to have to market it, your going to have to talk about it and take people on a journey. Be prepared to back it (financially), and know what you are setting yourself up for.’

Likewise, carrying on using existing platforms you are now at the behest of that platform. You need to know how that platform works, be up to date with that platform, even really simple stuff like Facebook are constantly changing their algorhythms. Parry added, ‘If you don’t know that your stuff just gets lost in the crowd.’

Buchanan likened it to the stock market. ‘Think of it as stock and flow – building content is the stock…the flow is everything around that – the distribution channels such as Facebook, twitter your website and social channels. If you don’t have content you don’t have flow.’

So should we be sticking with what we know or be thinking of building new channels of flow?

Clearly, we are all familiar the power of such connectivity, so how do we as organisations turn that into “a positive” without bogging us down by maintaining this new found interest? And what about the pace of changing with this looming knowledge that technology is constantly rolling into redundancy?

In all this talk we have to be mindful that many of our potential audiences operate on a low denominator in terms of technology. How do we take all these grand ideas and make them 640 pixels wide for a mobile device? How do we make the decisions what is the right platform to use?

Shaw said that ‘Since the NCCL we have been running visual excursions (via video conferencing). But not all schools have that technology. It is definitely a next stage thinking about digital technology and platforms that are more accessible – feel we need to get a little smarter how use content and not being afraid to adapt and reuse.’

Buchanan reminded that recent research showed (2011 Australia Council Study) that the engagement of audiences before, during and after to a museum were almost equal, adding that these virtual bookends to the experience could only be growing.

Given that then, and playing the devil’s advocate, he asked, ‘if ten times more people (audiences) are through digital audiences should then we not invest more money into that?’ And I would add, from that. It is the question we are all asking.

Parry said, ‘it is very easy to put the website in its own basket and say the rest of the organisation will keep doing stuff to make money. That is not an OK way to think of digital – it has to be an integrated approach.’

Parry sited New York’s Museum of Modern Art, which has reached its physical capacity – they don’t need more people visiting – so their net revenue stream has to be digital. That is what they are developing.

Buchanan turned to a local example as a case in point. Tasmania’s Museum of Old and New Art (MONA), which we have all championed for its “O” that tracks a visitor’s engagement and then brings that back to the post gallery experience. Rather it was a different secondary outcome to the technology’s development for MONA that has the commercial spin-off.

Art Processes is a commercial venture co-founded by MONA’s David Walsh that uses that intellectual property, technology and resolved outcomes to develop and sell tailored mobile experiences for other organisations.

SAMAG is a non-profit organisation that holds monthly lectures on topics of interest for arts professionals and cultural workers to raise awareness and advance professional development.

This piece was first published on artshub.com.au in February 2014.