With the announcement last year of the allocation of three major commissions – the first of three under the City of Sydney’s $9.3 million City Centre Public Art Plan – the thorny questions of what constitutes consultative selection and what defines appropriate community engagement are raw topics.

Art Month Sydney’s Artistic Director, Glenn Barcley, decided to pose these questions to a panel as part of the event’s series of talks this month. Artist Tony Albert, whose monument to indigenous service men and women will be unveiled in Sydney’s Hyde Park South on 31 March, was joined by art writer Elizabeth Fortescue, artist Ian Milliss and Director of the National Art School, Michael Snelling.

Snelling laid some foundations with a definition for public art: ‘that is public work located or staged in a public space in any media, big or small, permanent or ephemeral. It is not an art form.’

‘It is an old and venerable history. We have stopped doing quite so many bronzes of eminent people, who are usually white men, and we have started to examine other ways of enlightening or violating (depend on your position) the public areas that we are all occupying. It sometimes divides communities and sometimes brings them together. Commonly, it is “slagged” and then, slowly, becomes loved.’

It was bait to Milliss: ‘I don’t like public art much. I’ve worked as a consultant documenting the public art collections of councils (and) the reason is simple – I have seen more of it than most people. I just know how awful it can be.’

So then, is the problem just about quality control and aesthetics? Snelling reminded the audience of the three complaints consistently touted: don’t like the art, too much money, and ripped off someone else.

While they might represent the status of public art now in Sydney, so too does Albert’s military monument, which in contrast has been deeply celebrated. ‘Public art that happens of logical necessity and the stuff that is imposed for less meaningful reasons,’ said Milliss, is where the distinction lies.

‘If something is meant for historical contemplation, like Raynor Hoff’s war memorial sculptures in Hyde Park or the Valmanesh’s really beautiful motivation sculpture set into the walls of Hyde Park Barracks, or Tony’s work, these all have reason to be there and they are appreciated.’

‘The underlying problem is that public art is rarely a natural expression of those living in the area but almost always imposed by developers, governments or art institutions, all the agents of the neo liberal regime. Moneymaking and calming distractions is all that is allowed,’ continued Milliss.

Milliss’ views are flavoured by his work in the 1970s with the Green Ban Movement, where he explained one of the ‘underpinning understandings was that the city was a type of commons; it is collectively created and collectively owned. It is not owned by developers and shopkeepers; It is created and owned by those who populate it.’

The same principal he applies to public art and the stories it tells.

How to augment community stories

Tony Albert has worked with community throughout the commissioning process, going to country, collecting stories and collaborating with other makers to develop an accompanying text and planting native vegetation for ceremony around the artwork.

He said that one of the challenges in creating a public artwork that serves to commemorate a community is this idea of representation. ‘How can one artwork possibly speak for a whole people?’

‘(Artists) can come into the situation, listen and become the vessel for producing something, what I like to think as responding to community needs rather than it coming from the community.’ It was an alert distinction by Albert, and one that sat counter to Milliss comments.

‘There is not much of that. The reality of public art is different and the problem is it’s (often) done in bad faith, and I don’t mean by the artist but by the ones who sponsor it. Invariable these things come with a consultancy processes, stake holder management and public participation theatre, which is all designed to disarm dissent and manufacture a façade of involved.

‘Most people, including artist, have a rather romanticised idea of how public art comes about – a bit like the general belief that the money donated to charities goes to charities.’

While Milliss comments sound extreme typed in black and white, he also spoke of his own successful involved in community driven public art. He developed the Lithgow Heritage Avenue, which connected the main street with Blast Furnace Park via 23 sculptures sitting high on pedestals, augmented with information accessed by a smart phone. For example a teapot acts as a portal to the pottery in Lithgow and further to the history of pottery in Australia.

Like the intimacy of Milliss’ Lithgow example, the panel were all in agreement that Tracey Emin’s 60 bronze birds was a sensitive and indicative example of a new future for public art. 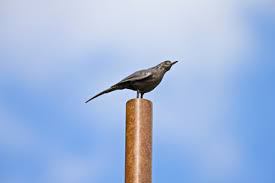 Tracey Emin​’s bronze bird, one of 60 that will scatter out the CBD

Fortescue proposed the idea that the time for big “plonkable” sculpture has passed.

What emerged in the discussion were examples, such as Ron Robertson-Swann’s minimalist sculpture Vault (1978), commissioned by the Melbourne City Council and more commonly known as the “yellow peril”, and Bert Flugelman’s Pyramid Towers, which was dubbed the “stainless steel shish-kebab”. It got the ire of then Lord Mayor Frank Sartor so that he relocated it from Martin Place to Spring Street, behind Australia Square where Alexander Caldor’s modernist heavy metal work defined another chapter of Sydney’s Public Art nurtured by architect Harry Seidler. 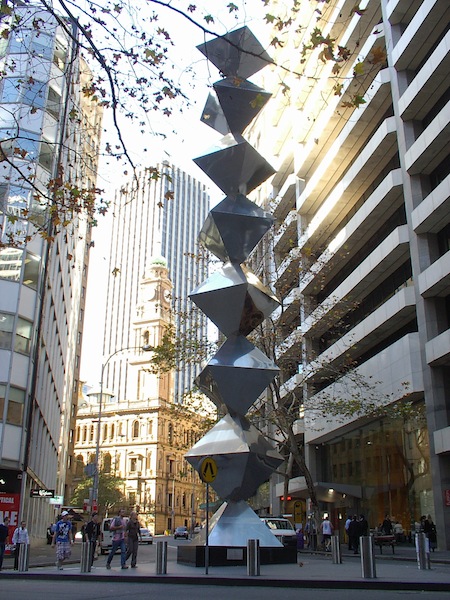 Flugelman’s Pyramid tower which was relocated due to public opinion.

‘I think now the city knows what it is. Post 2000 Olympic games we are very sure of who we are and we don’t need anybody else’s imprimatur. We need to be sensitive to our own ground swell and allow our own artists to come up with things that reflect us for who we are,’ said Fortescue.

Fortescue used the artist Will Col 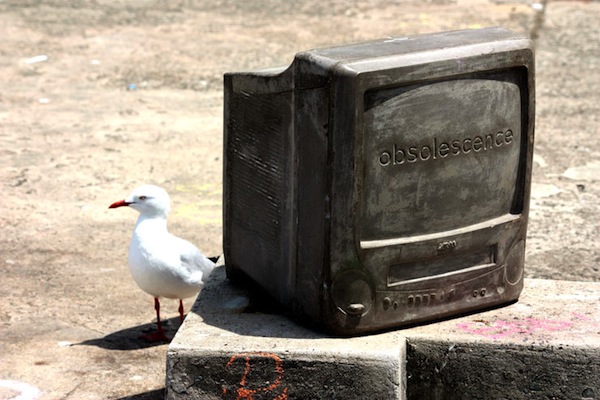 ‘We have wonderful artists of our own here, and we need to give them more opportunities,’ she championed.

Albert put his hand up for Armanious’ milk crate, saying that while the commissioning may have been driven by an art consultancy panel, recently attending the Sydney Mardi Gras and standing on a milk crate along with everyone else he recognized the importance of that throw away object became really apparent to a broader public and when used as a stage linked to that event-driven culture that is ubiquitous to Sydney.

The crate touched on an idea of permanence and temporaneity of public art. ‘Just as the city has changed so have its need for cultural engagement,’ said Fortescue, suggesting that public art doesn’t need to be permanent.

‘It can be public art just to be enjoyed for a couple of days or a few months and as a city we should be encouraging that.’

Milliss championed the idea of the semi-permanent or annual project, using London’s Trafalgar Square Fourth Plinth as a stellar example. 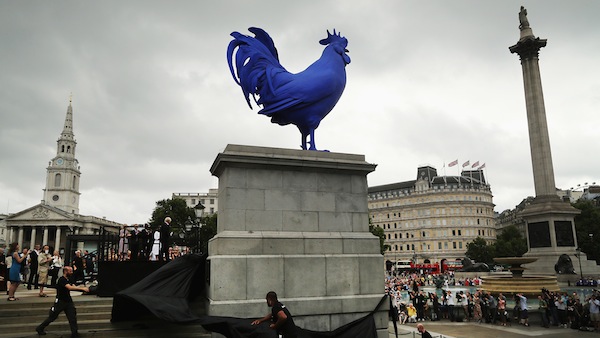 ‘I would prefer to see large scale temporary work built anew every year…perhaps the milk crate could be the first instance and we could replace it next year and replace it with different folly,’ joked Milliss.

On a more serious note, Milliss noted: ‘There is a form of public art that cuts across all this (tension) that involves real active public participation and that is street art. It remains officially frowned on and, even if it is only acceptable to part of the public (well that is also true of official public art), the road to acceptance of street art is making certain sites legal.’

Milliss suggested that if we were to take that cue: ‘that no matter how good it is, it should only be documented rather than preserved because the important thing is the site and its availability, rather than any single instance of activity. That way the work could be far more adventurous but acceptable to more people because it would be gone in a year – they don’t have to vandalise it to get rid of it!’

Snelling noted that Queensland College of Art has recently launched a new elective in conjunction with QLD Rail, which is about doing graffiti and street art.

So the models are shifting and public art is continually being redefined. What might some of those future models be? Street art, virtual overlays, temporary sites – these were some of things raised by the Art Month panel.

‘Public art can be anything – it can be an app. That is not even a radical thing to say today, said Milliss. ‘In tis most minimal version QR codes take you into a (web)site and give information on what is surrounding you. It could be history to just a complete fiction, and it can accumulate over time as people participate in it.’

Albert said that his monument will be the first of City of Sydney public artworks to extend that viewer experience.

Milliss raised the point that Sydney is covered with rock engravings, some under buildings in the CBD among other locations. It is these history that you can bring alive through technology as a public artwork.

‘I don’t want to suggest that they should be appropriated into some European category of public art – absolutely not – but I raise them to make the point that they are many significant things that exist almost invisible in public spaces, and if we wish to talk about creating a new public art, maybe we need think about how we can follow their lead.

‘That will be the transition from these material objects, dotted around the landscape, to another intangible set of overlays that exit in the city,’ Milliss imagined his future definition.

Milliss said he doesn’t have a solution for ‘the usual futile panaceas that are rolled out: the stuff should be better, there should be more public consultation.’ The core of the issue is the city continues to grow and change. The current model Milliss believes is doomed soon to be obliterated by climate change and outdated by new technology.

The panel concurred in conclusion that public art that will come out of that of having a clearer understanding of the city. It will be a more open source, social public art – that would have the city as both its content and its form; that would play with its history and its processes; it would be virtual and participatory, and I hope, added Milliss, visiciously critical of the mess we have made, but almost invisible in way of reinterpreting the physical spaces of the city through an overlay of data and online services rather than physical objects or events.

This article was first published on ArtsHub 26 March 2015.

es as example, soon to leave Sydney due to rising living costs. ‘His form of public art is organic, random, genuine, flowering of his own sense of humour. He manufactures concrete objects and carves enigmatic words in them and super glues them around the city – remote controls, washing machines, balaclavas, gloves,’ explained the seasoned journalist.