Island dreams and hopes get shipwrecked with Seton’s new sculptures, which continue his interest in the issue of asylum seekers.

Walking into Sullivan + Strumpf’s Zetland gallery, the golden glow of a tropic island paradise besets the viewer. Human-scaled palm trees sit on a mound of marble shards, their silhouettes cast on the back wall of the gallery creating a kitschy tableaux bathed in orange light. Something feels “not quite right”.

It points to an earlier occurrence of the palm tree in Seton’s work in the 2010 exhibition Infinitely Near, the installation An Island in the Sun (2010) (pictured top). However, in comparison this group appears to have had a shot of steroids.

The colour of the marble plays out a further connection. Sitting on rough cuts from Seton’s celebrated installation, Someone died trying to have a life like mine for the 2014 Adelaide Biennale – which was subsequently acquired by the Art Gallery of South Australia – the fleshy pink tone of the Wombeyan marble starts to take on a more symbolic role than the mere reflected glow of this tropical scene’s “inbuilt sunset”, as Seton has called it.

The title of this exhibition gives us another hint that paradise is lost.

‘Non-refoulement is the international legal principle that protects asylum seekers and refugees from being sent to any place where they have a well-founded fear of persecution, or where they face a real risk of other serious human rights abuses. It lies at the heart of the international regime to protect people from harm in their own countries,’ explained Professor Jane McAdam for the exhibition’s room sheet, adding that non-refoulement is not discretionary; it’s a legal obligation.

This small oasis in a Sydney suburb is anything but a mirage of happiness. As Seton described in a statement: ‘It is both a paradise and a prison; rock solid and full of air.’

As one ascends to the upstairs gallery, Seton’s provocative dialogue on the topic is further played out in pristine minimalism.

Hearing that this exhibition continued Seton’s Adelaide piece, I was looking forward to a flotilla of life-jackets and, if anything, felt the presentation of a single vest with bust-like monumentality on a waist-high pedestal didn’t make the same connection. 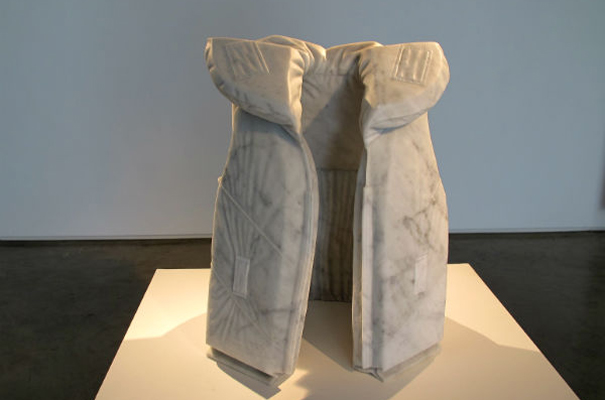 But, spending time with the piece – moving around Life Vest (emergency) (2014) (pictured above) – you start to read the placement as very strategic, so that the viewer has a bodily engagement with it. And as we stand in front of it in quiet consideration, we realise that our shoulders are indeed in line with that of the vest. Is this a weight that we all should bare?

It was a curious decision of Seton’s, and whether it is as successful as the objects strewn on the ground I am still unsure. It was caught somewhere between being too subtle and too military.

And, yet it sits there confrontational and proudly defiant – resilient; emotions that echo the vest’s material rather than the portrayal of dreams sent awash. It is a memorial of a different voice. 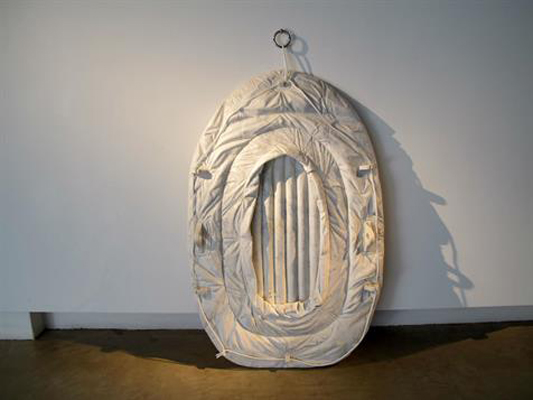 In contrast, Seton’s sculpture Durable Solutions I (2014) is a very powerful piece that captures a hopelessness of the situation we / they face. A deflated life raft, it was propped against, and teethered to, the gallery wall, defying physics. Again it reminded me of another work from that earlier 2010 show, The Accursed White Whale (2010), a deflated pool toy again learning against the wall and carved in the same Bianco marble.

It is a curious pun when the aid to swimming pleasure becomes a device for carrying asylum seekers to a new haven, to safety, that hope then deflated.

Characteristic of Seton, he uses polyester rope and spigots to suspend reality. You move from the plastic polish of the palm trees downstairs to the web and weave of the rafts fabric. Seton is a magician of surface.

There is a third sculpture upstairs – a real pleaser. Simply titled A Paddle… (2014), it fuses bianco marble with a timber handle. I can see these paddling out of the gallery!

I wanted to see more with this show. But then, is that just our contemporary taste for excess, or the sheer delight in Seton’s work, that you want the next, and then next, feat of wizardry?

It is no surprise, however, that this show is light. Seton has long been a minimalist and approaches his marble sculptures from a conceptual position, countering the weighty tradition that their material carries.

What this sparseness does is emphasise how we, as a nation, deal with the issue of asylum seekers; it remains coolly distant. The numbers, the volume, the intensity of the situation reduced for more palatable consumption

All images courtesy the artist and Sullivan + Strumpf Sydney

Exhibition is travelling to: