While his art will remain his greatest legacy, there is another that has had a remarkable impact on a generation of Australian artists. Jacks founded the Australia Council’s Greene Street Studio in New York City – Australia’s first international residency program.

Queensland artist Donna Marcus was installed in the studio at the time of Jacks’s death. I caught up with her in New York to churn over the notion of legacies and value of the studio in the wake of the Australia Council’s new strategic plan.

The Greene Street Studio was established over ‘a handshake’ with Jacks, said Studio Manager Kathy Morano, over a drink in the infamous artists’ hangout, the Broome Street Bar. The year was 1976.

Some 38 years later, and a matter of days after Jacks’ death, the Australia Council launched its new strategic plan, one that has defined among its four key goals the desire to grow Australia’s profile overseas. It states: ‘As borders dissolve, dialogue, collaboration and exchange between Australian artists and their international counterparts will be greater than ever before.’

Sited on the fifth floor of a classic SoHo walk-up, the cast iron building was designed by J.F. Duckworth in 1872. The area remained industry-based until the 1970s, however artists started to move into, and claim, the neighbouhood in the 1960s.

Jacks had been living in New York at that time when he came across Morano’s advertisement for a ‘raw space’ and, supported by Leon Paroissien the founding director of the newly established VAB of the Australia Council, the pilot residency got the green light. Today, it is the stuff of legends.

Folklore has it that wherever Dia Art Foundation bought the neighbourhood took off; and Australians were firmly planted within the heart of that. Walter De Maria created his infamous, The New York Earth Room, down the road from the studio the following year, and The Broken Kilometer, within a couple of blocks in 1979.

When Jacks returned to Australia in 1978 William Wright took over the management of the studio with partner Hilarie Mais, then eventually Morano.

The roll call of artists who have been through the studio over the past 38 years is a remarkable slice of Australian art history. Donna Marcus joined that alumni completing her residency in October, with Michael Zavros next in line.

But what does that space mean to an artist?

Is it more than just a line on a CV? Marcus said: ‘You do feel this sort of legacy.’

‘Within the first few days you get a sense of the enormous value the space allows. It gives you a chance to stand back from your own practice – to realign, to recalibrate,’ she said.

‘When you first wake up it is like “I have 89 days left”. It’s a sense of mortality. I felt this urgency all the time to do as much as possible,’ explained Marcus. ‘But it is also important to understand that times of not being very productive can lead to the greatest productivity.’

Marcus has been celebrated for her works using kitchenware drawn from a trove of used knobs and aluminum lids, the detritus of domestic utopia from a modernist era. She has collected and assembled these objects for near two decades and, on occasion, re-created them as large scaled public artworks. For her New York was a shazam moment – a natural connection.

‘The overriding context of modernism in that city is amazing,’ said Marcus. ‘There is this wonderful exposure of services because the city is so dense. You can almost imagine the whole city being plugged in. It is city as a machine.’ 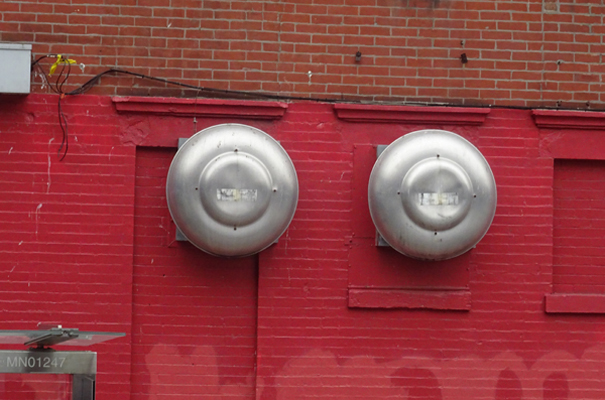 Not surprising, it was the objects that define New York’s streets that caught her eye – vents and grilles; sink strainers and pizza trays; subway tiles and sidewalks.

‘You are faced with this beautiful white wall and you feel like you have to do something. I began doing sketches using sink strainers. I am very happy to have made large works that pack into a shoe box!

‘I have been playing around with pot nobs – which is the hand being insulated from the kitchen and those materials we use as the separation between the body and the building – the city – and this idea of how we filter. That is what interested me with the sink sieves. The other thing was the subway tiles and this overwhelming realisation that every part of this city is surfaced,’ said Marcus.

A residency gives every artist a gift in some shape or form. For Marcus it was a nipple shaped sink strainer, which also had a wonderful metaphorical tug: the layers of the city; its history; its mechanics and the need to filter.

Staying open to those kinds of gifts is key to any residency; to avoid being too blinkered by making or a perception of what that residency is going to give you. It is never going to give you anything because you are so closed.

‘I bought myself the Chicago pot brick cutter for butter and will do a series of ceramic work based on small components, which will take me back to this ongoing project with the nobs as moments of insulation (connecting with the tiles)’ said Marcus.

Is the greater gift time or location?

‘Absolutely both!’ Marcus continued: ‘One of the great things about a residency is it gives you this bubble to work in (called) time. To be so stimulated but then being able to retreat back to a quiet space. I love that you can feel for a moment that you live somewhere. But there is also guilt with this time.’

In terms of location Marcus explained: ‘New York in so many ways is deeply familiar to us all because it is such a filmic place. There is a deep nostalgia for a city that is not really known. But also, personally, New York just has a strong link with my work and the sense of provenance.’

‘It also puts you in touch with this interesting community of Australians in the arts abroad,’ added Marcus.

Community, access, depth – anyone who visits New York is impacted by the scale and weight of its art scene; the calibre and breadth of the exhibitions across both museum and commercial galleries.

One of the small advantages of the Greene Street Studio residency, which offers yet another legacy for visiting artists, is that it comes with membership to all the major museums, allowing artists to return with ease.

No wonder Greene Street Studio is the giant of residencies.

And, advice when heading off on any residency?

Marcus gave one of the most valuable pieces of advice that is so often overlooked: ‘Try to clear the decks before you go.’ It is so hard to do in this day and age, and the disconnect is difficult, but it clears the head to be in that place.

‘Research thoroughly but also allow for the serendipitous, and plan to make (work) afterwards. It should be a pause.’

Marcus concluded: ‘It has left me feeling that all I need is a shoebox to live in and a huge white wall.’

‘You can smugly sit there on the fifth floor looking at the tourists below, and then it all comes to an end and you are evicted, and you are just one of them again on the street,’ concluded Marcus.

While the moment has its own mortality – as Marcus described – the memory has a lasting impact.

Residencies do bolster and professionally endorse an artist’s career, however the more realistic barometer of that line on that CV is how the conversation continues in the work afterwards; how those photos and memories are digested.

As with Robert Jacks – and the chain of artists that followed him over the past 38-years – that moment is a timeless legacy.

Gina Fairley’s travel to America is supported by an Australia Council for the Arts New Work (Established) Grant.