In collaboration with Galleria Duemila.

Titled Saluysoy, which literally means ‘an eternal spring’ in the Southern Tagalog dialect, I chose not to take the conventional chronological path but, rather, to usher viewers through an understanding of Roberto’s minimal and abstract works, but also his personality – often misunderstood within this art scene.

His practice is incredibly diverse and his artworks have total clarity – they’re brave and incredibly focused. He can sit in front of a painting or sculpture for months before allowing it be showed. It is a deeply spiritual state of connection and gesture.

I met Roberto in 2001 and had seen many of his shows over the decade. Preparing for this Retrospective, we spent ten months just going back through his archives, unearthing several major works that had never been shown before. In the end there were 80 pieces that moved from large scale outdoor sculptures to intimate collages and minimal ink works on paper.

To make sense of this volume and journey across place and time, I used three moods or themes to navigate viewers through the exhibition – containment, purity and gesture – and across all was the common theme of materiality and experimentation.

How did it all start for Roberto M.A. Robles?

When he was a student in early 1980s he bought a back-issue of the magazine Running, which had an article on famous coach Kiyoshi Nakamura, who linked running with Zen Buddhism. He was quoted: “Zensoho is to run with the heart and spirit. To reach the top you must have a pure heart.”

Upon reading the magazine, Robles set the goal that in five years he would make a legitimate mark on this art scene; he also started running daily. 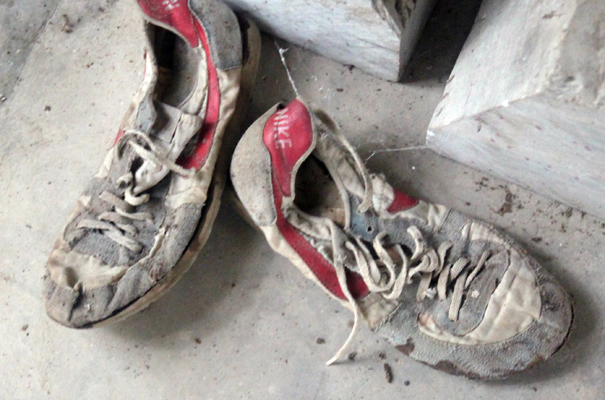 In 1983 he had his first solo exhibition at Sining Kamalig gallery with a suite of black box assemblages, which open this Retrospective. From a western perspective we tend to immediate jump to the American artist Joseph Cornell, known for creating a poetic spaces from everyday objects, somewhat formal and Constructivist in character yet erstwhile fantastical.

Robles’ boxes were entirely self-styled, blending a very personal narrative with a biographic tone of a nation in turmoil during the 1980s. These assemblages were essentially 3-dimensional collages and if anything fit more into those kinds of spatial dialogues than social-political commentary. 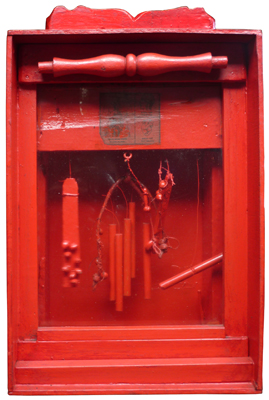 In 1986 he won the Grand Prize in Mixed Media for the Art Association of the Philippines Award for one such box. Sadly it has been lost; the association doesn’t know where it is. It was an all white box in a diptych format, half made just prior to the EDSA revolution; the other after.

Clearly, the goal Roberto had set himself when he read that running magazine had been reached. While Robles had read about Soon-now – the Japanese concept of total obedience – in the magazine, it was really only fully understood when he moved to Japan in 1991.

Saluysoy, for Robles, is a metaphor – a journey – that we can also take towards a harmony with nature. The end of this exhibition was a place for meditation; a dimly lit room with an expansive minimal painting.

It was in Japan that he did his Masters Degree at the University of Tsukuba (in sculpture). Because RRs work is so “rough” we forget that he is an extremely skilled sculptor in the more colloquial reading of ‘traditional form’.

The marble sculptures Noah Ark, Ark 5 and Quarter Moon were the first works Robles showed upon his return in 1995, when he took up the position of Dean, College of Fine Arts, University of the East, Manila [1995-97]. Two were included in this exhibition. Noahs’ Ark is now in the United States in a private collection.

It was also when Robles made works such as Time – paintings made of lead and found materials, working concurrently in experimental materials and marble. Time was made the same year as Quarter Moon – you start to understand the dexterity and conceptual complexities that lie behind Roberto’s practice. 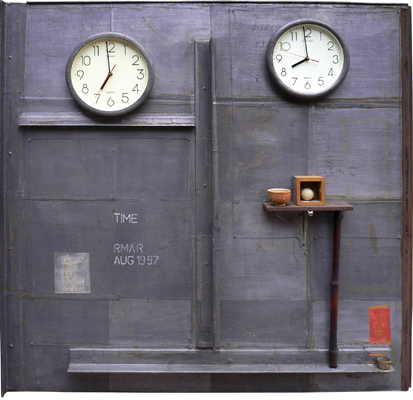 He had two significant solo exhibitions in 1998 that were split in their personalities: The first simply titled Boxed Landscapes was at the Cultural Centre of the Philippines; the other Recent Sculptures in Marble, started his long relationship at Galleria Duemila – five pieces made from Rombolon marble and one from Carrara – Korous – shown in this retrospective.

Apart from Korous which takes its name from Greek Antiquity – all the sculptures were named after nature – Earth, September Wind, Ninth Moon, See, and Ebb Tide. They were inspired by Japanese Haiku Master poet, Matsuo Basho:  The old pond; A frog jumps in, The sound of the water.

Roberto says: “The Haiku was the start point of that tract of thinking – how a poet arrived at three lines of poetry – my sculpture “Seed” gets close to that place.”

“Immediately the image of concentric circles rippling outward flashes into our minds. Each circle – a simulation of the real appearance of meaning – which the lean, economical words of the haiku communicate…the blues of a serene pond surround the viewer, a charging buoyancy of mood that stains every fibre of the canvas.”

Over the years Roberto has been more colloquially know for his zen-like minimalism and his bright abstractions. When we use the term zen – cha’n in chinese or son in Korean – we tend to package up ideas of simple design, gray tones and a blend of materials – wood, stone, water, paper suji screens, and so on.  Robles’ sculptures and collaged paintings work against such categories.

He never studied calligraphy; he never adopted Buddhism for example. However, Japan, Korea and China have had a huge impact on his art. 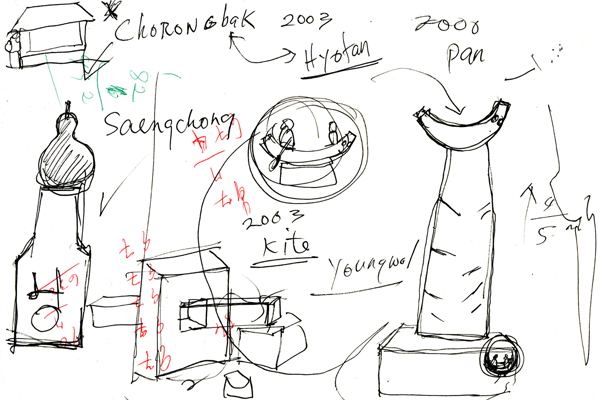 Several major public sculptures made during these trips remain in Korea.

Between these visits Roberto produced some of his best work. Next came the three man exhibition in 2002 with Gus Albor and Tony Twigg at The Art Centre at SM Megamall and which – in part – Tony and I bought to Australia and presented at the Ray Hughes Gallery.

Roberto had started making very exciting experimental collages with cardboard. Several pieces from this period are in this Retrospective. 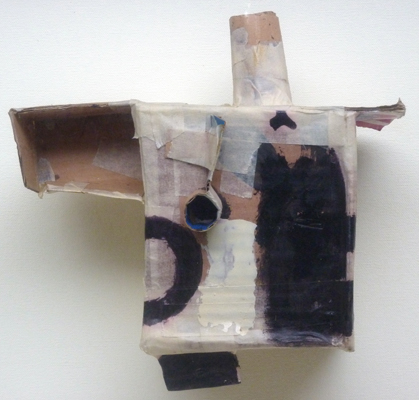 In 2003 he made a suite of metal sculptures which I presented in the gardens of the Ateneo Art Gallery for the exhibition; one of which was acquired. They are focused studies of the circle and the square – constants across Robles 30-year career. 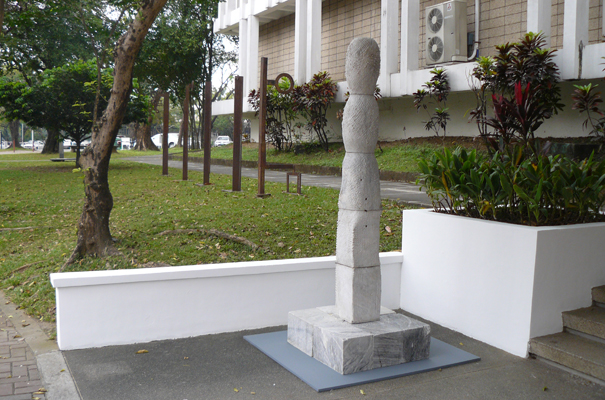 While we can relate the circle to the Enso – the calligraphic mark done in a single action after deep contemplation – that spirit and energy is most definitely there but these ‘circles and squares’ are more like a dictionary of gestures that could be called Robles’ vocabulary.

Key it how he handled material – scrapped, scored, stapled, left raw, torn, collaged, gessoed etc. A stunning show that captured these free bright brushy gestures was Rekindling 47 Compositions of Colors and Forms in Relief Space, August 2004. It marks the next section of the Retrospective that explores colour and experimentation. 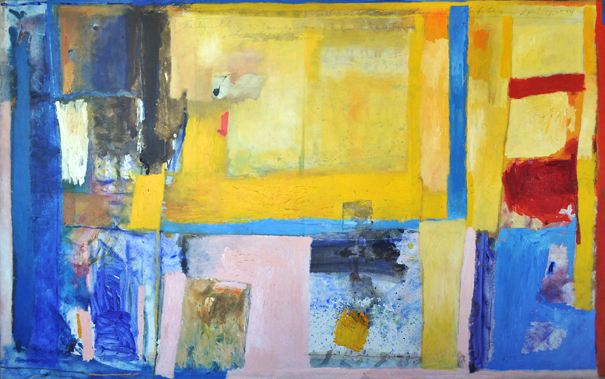 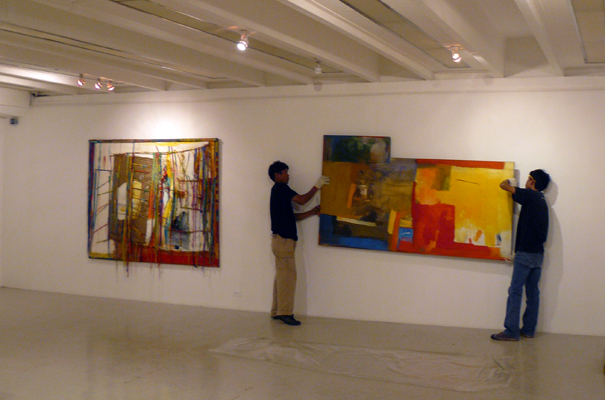 In 2004 Roberto had the opportunity of another landscape – another residency. This time the celebrated Vermont Studio in Jackson USA. It was an extremely prolific period – making over 30 stone sculptures and mixed media works – they all remain there.

In our conversations preparing for this exhibition Robles said that his residency exhibition was another important milestone – a transition. He explained:

After Vermont I continued working but could see changes. You can see the work maturing like the tadpole has turned to frog. You turn old and you see reality, you see problems – and the realization that you can’t solve the problems. You are just a small element.”

Returning home Roberto snap-locked back to the landscape of his heritage, Batangas. In Japan he discovered the Haiku of Matsuo Basho. In Batangas he found his own Haiku:

In 2005 he produced the solo exhibition Tadpole to Frog consisting of six major works – three of which are shown in this Retrospective – two paintings of the same title and the granite column presented in the sculpture garden. 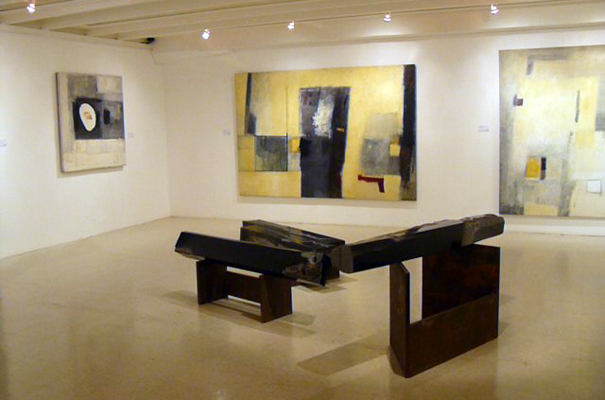 The year later was From the old pond I ponder (2006). Three works from this exhibition are included in this Retrospective (including painting below), including a paper installation that travelled to Australia to SLOT. 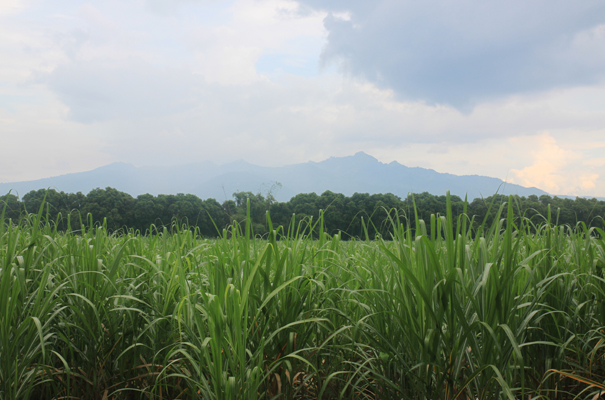 Attending to my stone the following year was a stunning show combining dark, moody paintings that captured the evening sky of Batangas glowing deep within the canvas.

After this show Roberto again had a change. While remaining deeply rooted in the psyche of Batangas, he moved towards exploring the notion of heritage and evolution, fleshed out in the exhibitions Felipinas, The Chan Rooster’s Threshold (2008) and Origens (2010). To an onlooker they appeared much rougher than the past meditations; often using plaster and found materials.

What we also witness it that Roberto goes full circle to the figure – to the origins of form as studied in Japan – the origins of spirituality and the origins our who we are as Filipinos and individually. Robert said:

“we are never quite complete, as parts of ourselves are posited to be transcended and this is why it is natural, if not human, to look back into our origins and states.”

It is a textured journey this Retrospective takes the viewer on- capturing mood and moment; memory and meditations.

The conclusion point, for me curating such a breadth and journey, was to end with a room for reflecting. A large diptych sat in a low light room with very subtle music from Roberto’s pond in the background. Everything comes together – evolution and purity; ebb and flow. 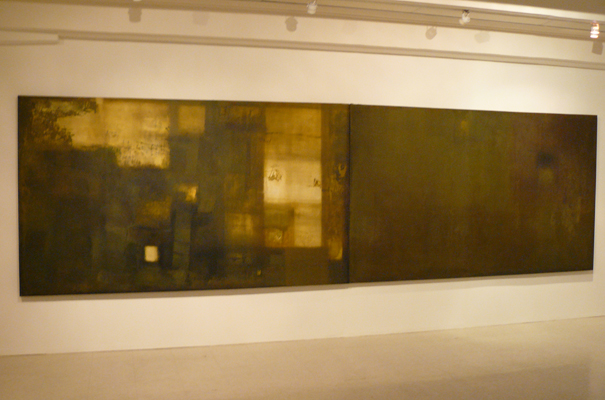