With its title Trans/portable, this exhibition at the independent MO_space Manila (4 August – 2 September 2012), explored how culture is carried beyond cartographic or physical boundaries. To navigate this concept, Australian curator Gina Fairley turned to a group of artists who live between and across the Philippines and Australia: Alfredo and Isabel Aquilizan, David Griggs, Juni Salvador, Tony Twigg, and the recreation of a historical painting by the late master Ian Fairweather, who lived in the Philippines during the 1930s before making Australia his home.

For these artists, ideas such as ‘place’ and ‘identity’ are of less concern than the intuitive flow of ideas that come from the movement between places. These artworks explore how painting and drawing shift across locations, from the physical passage of the tangible object to questioning how ideas and histories are carried and rewritten, responding to different criteria and value constructs. 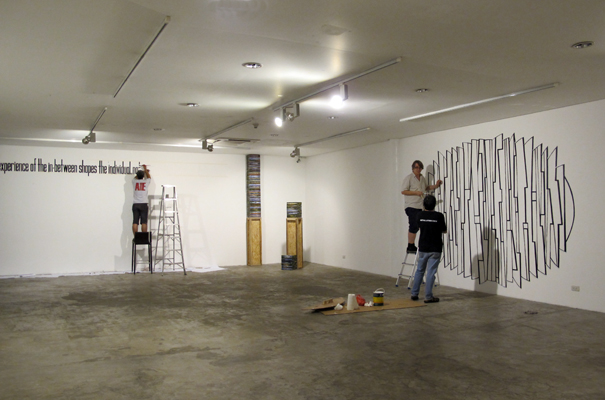 Filipinos are currently the third largest Asian-Australian migrant group behind Vietnamese Australians and Chinese Australians, and yet little attention is paid to the cultural engagement of this group within Australia. Why is a curious question? It perhaps says more about the Filipinos desire to ‘blend in’ or assimilate rather than uphold the kind of cultural separation endorsed by Australia’s multi-cultural policy. Indeed one may suggest that the Filipino celebration of the mestizo offers an interesting starting point to a discussion on contemporary exchange, where the psyche ‘to blur or fuse’ replaces the colonialists position ‘to take’.

While we like to ascribe the peripatetic tendencies of these artists as a contemporary phenomenon resulting from our increased global mobility, the ‘artist exchange’ is not a new situation. I have taken as my cue to this discussion Ian Fairweather’s masterpiece of Filipino subject matter Anak Bayan that sits in the Art Gallery of New South Wales (Australia), deeply celebrated but confused in its context. Its visual and textual mistranslation speaks more to the invested mythologies and inaccuracies of written art history, rather than the incisive and intuitive observations of the artist condensed and distilled from the culture at large. It offers a thread that connects this group of artists and their practice, indeed, it encourages a dialogue about what drives contemporary art making in this region today beyond geography and pre-packaged notions of exchange and institutional constructs of value. Simply it is a search for truth. 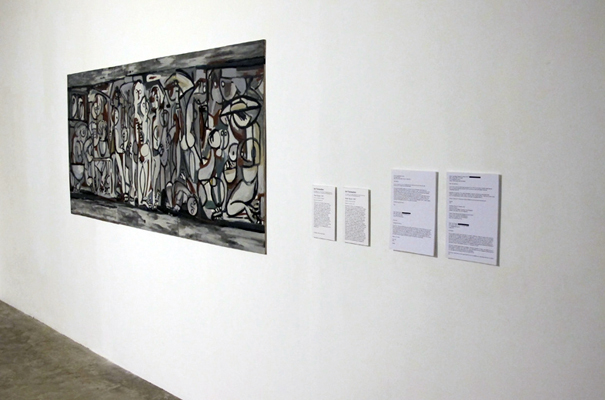 Trans/portable attempted to draw those connections across time. Fairweather’s ‘Oz-Phil’ masterpiece sits in dialogue with Juni Salvador’s installation. When Juni Salvador first arrived in Australia he collected framed pictures from ‘op-shops’ [not dissimilar to ukay ukay], leaving their price tag displayed. Many were reproductions of masters from Australian art history; others were not. Their selection was based on a different set of aesthetic decisions and constructs of value than their original source. Having no knowledge of their context or significance, Salvador built his knowledge of Australian art from this position of the discarded reproduction. 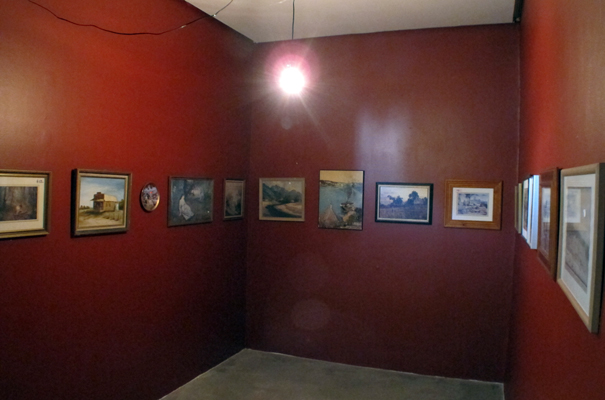 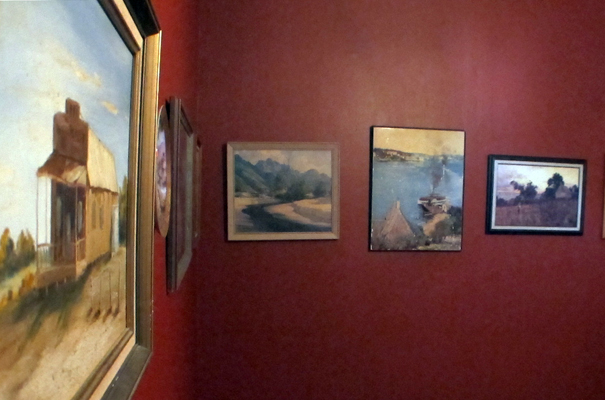 Simply titled Living a cliché, this installation questioned notions of how we construct pictorial narrative, unreliable biographies, and systems of cultural and economic value. By placing it within the context of the Philippines it is an interesting repositioning of the concept of cultural flows and displacement.

The piece by the Aquilizan’s took it cue from their stacked installation, Edifice (2010), combining it with their signature use of Balikbayan boxes, this time translated to shipping crates. As they explain, “we create our own reinterpretation of history (migration) through a fabrication of an object and the collection of narratives that go with it”. To do this they have worked local Mabini artist Antonio Calma. One may question how these locally specific paintings translate to Australian audiences? 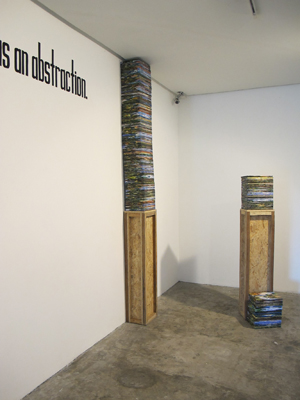 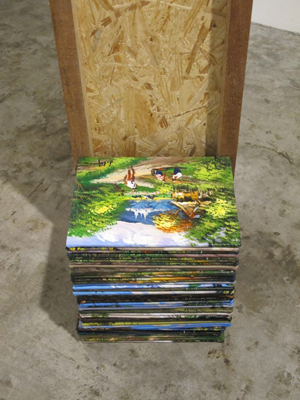 Stacked with commercial proliferation – the image turned in on itself – these paintings operate within the realm of the international art museum, what curator Joselina Cruz has described as ‘translations from folk exotica to clever conceptualism.’(2010) I worked with the Aquilizan’s on a text element that explored the ideas of the exhibition in conversation with their work, employing a local sign-writer to realise the text:

“The experience of the in-between shapes the individual, not as a reaction but as an abstraction.” 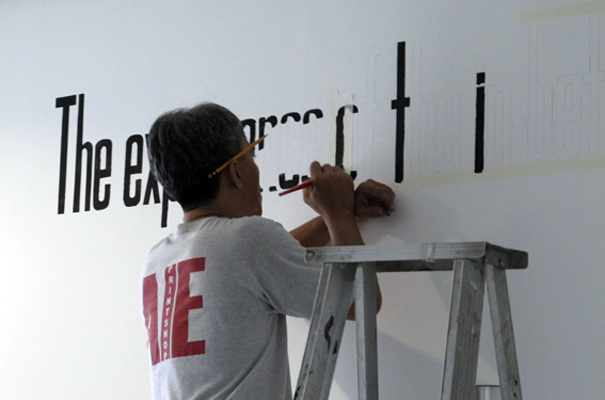 In the context of this exhibition, they offer an interesting conversation with Salvador’s piece, questioning notions of how we assign value and authorship, navigating the ‘real’ within the hyper-reality of the global art world.

David Griggs’s growing interest in Australian art history has emerged after his prolonged stay in Manila. To a Filipino they don’t immediately read as “Australian”, and yet to an Australian eye the reference to Sidney Nolan is unmistakable, drawing deeply upon a collective Australian psyche. It is a rather different foundation than the Filipino iconography and collaboration with local painters he has practiced over the past five years. 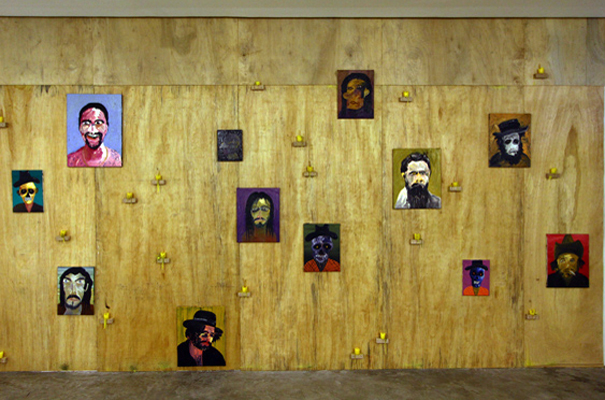 Titled The cowboy paintings they are all folkloric Australian ‘characters’ drawn from both history and contemporary society, and when removed from their context, uprooted and transplanted, and rendered anonymous, we are forced to consider these works by alternate criteria. Staged with a Filipino religiosity of candles and a make-do backdrop of plywood, Griggs plays off reverence with raw aesthetics of a barong barong tradition, and interrogates the ethnographic document of the portrait and its veracity when ‘transported’ out of the context of Australia, to another location where ‘the portrait’ is held with deep regard. The points of reference become blurred.

This exhibition also examined the very notion of transportability from a more literal position of physical passage of the object to the way these artworks are read in different locations – responding to different spatial flows. Tony Twigg’s installation was the most abstracted definition of transportability in this exhibition, exploring contemporary mobility as ‘transported form’, playing off the physicality of the gallery’s tangible space with a facsimile of an object, sliding between 3 and 2-dimensional form. 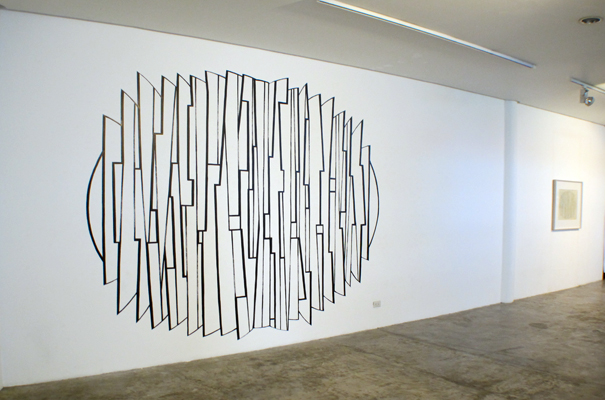 Twigg’s wall drawing played with how we construct the foundations of our understanding – visually, spatially and culturally. With the actual ‘sculpture’ removed the viewer is reliant on a set of constructs to form ‘an image’ of the object – memory, knowledge, instructions, description, perception. Through its very removal it questioned those systems of evaluation, and furthermore, when recreated from a set of instructions it forces us to engage with how cultural material is transported and translated across locations.

What is true and what is contrived, what is real and what is imagined – become the most pressing questions Trans/portable leaves the viewer with, forcing them to reconsider their own frames of observation and context.

Essentially, the artist carries with them their own frame of reference for observation and navigation of place. It was hoped that this exhibition would throw up fresh thoughts on how we define histories, value, identity and movement in our times.

MO_space is located at Fort Bonifacio, Manila (The Philippines)

Foucault, Michel. (1967) “Des Espace Autres” published by French journal Architecture Mouvement Continuité in October 1984 and was basis of lecture given by MF in March 1967, ‘Of Other Spaces, Heterotopias”.