It seemed fitting to curate a show of Jumaadi’s work – an inveterate traveler in the region, as was I at the time. His was a perpetually hyphenated journey between places, traveling light but carrying memories in short poems and visual diaries, less concerned with the ideal place. It was a sympathy I shared.

I met Jumaadi en route from Manila to Sydney to install Travelling Light and present a talk with him, along with a performance he’d been working on with some local artists. It was his first solo with Taksu, and Jumaadi made a new body of paintings while in residence with TARP, Taksu’s program for visiting artists in Kuala Lumpur.

Paired with a vitrine of artist books and collected ephemera, and shown with grids of paper journeys from his sketchbooks he had traveled with via Sydney through Bali to Malaysia, it was an exhibition that moved across scale and medium, where water and the mountain were threads that connected the work. 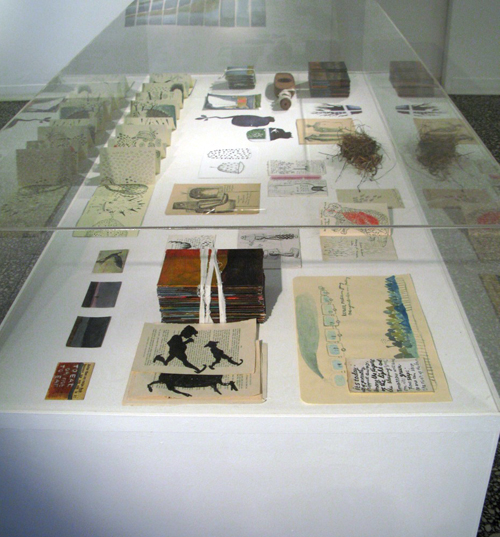 The daily cycle of torrential rain, for me, defines Kuala Lumpur as equally as her skyline; a cooling balm with a pungent earthy follower. These new paintings of Jumaadi’s had found a place to settle from their journeying, in sync with the gallery’s garden setting, offering a calmness and freshness to the viewer like that moment after a dusk storm.

The painting were of a scale unusual for Jumaadi, and took on a rigorously minimal tone. It was as though his small individual diary pages had been blown up to steroid proportions. And, like the the passage that his rows of drawings offer – like a passing and punctuated view from a train’s window of a landscape – moving around the gallery it was easy to sink into these paintings.

Travelling Light then, was less about baggage and more about this nameless space for contemplation.

Telling stories through pictures is as old as art itself. It is said the word narrative derives from the Hindi verb narrare, “to recount” and is related to the adjective gnarus, meaning “knowing” or “skilled”. It is a tradition as old as the Mahabharata and Ramayana, epic tales that lead us on our way. With the twentieth century, however, a chain of dialogues decreed narrative no longer relevant as a medium – no longer ‘modern’: the Dadaists, the abstractionists, minimalists, dematerialsation, conceptualism, and post-modernism had no place for narrative.

Curiously, as these terms have gone out of circulation, narrative has become the navigational beacon for discerning today’s intercultural flows, as we search for renewed ‘meaning’ in the pace of contemporanteity. Neo-narrative, as it is called today, is more nuanced, ambiguous, and less dependent on our ‘reading’, rather articulating the hyphenated spaces and gaps in contemporary life through new media, performance, installation and, dare I say, has re-entered painting with a passion.

This duplicity of narrative is metaphor to our times. The traditional narrative structure of a beginning, middle and end is no longer tenable. It is a memory shared and abstracted. In the same way, Jumaadi permits audiences to enter his personal world of story-telling bridging these ancient and contemporary definitions.

Growing up in a small village in Sidoarjo, East Java [Indonesia], it was a childhood of playing in the fields, of grass puppets and folklore interspersed with herding the family’s animals. Like vapors of memory this landscape floats across countless sheets of paper, tiled together with no formal arrangement, somewhat musical, somewhat subconscious. It is not surprising to learn that Jumaadi grew up on the Mahabharata.

Time, therefore, is an abstracted lament in his work. As our lives are engulfed with the ever-increasing speed of things, Jumaad’s images beg our time and, in return, they usher us into a world of profound contemplation. In our conversations he explained, “…as much as I am moving, traveling, I really try hard to bring these works into absolute stillness. I talk and pray and meditate through my paintings.” It is an innate spirituality that sits outside religion. There is sureness, a resolve in his images, almost mantra-like drawing on a complexity of emotions and thoughts that are distilled into very pure expressions, each page a visual Haiku.

Over the past decade Jumaadi has traveled extensively. These works are collected from three years of visual diaries from Java, Bali, Sydney, Adelaide, the remote Australian town of Hill End and, most recently, during his residency in Kuala Lumpur. With time destinations meld and the necessity to define ‘place’ becomes inconsequential. These images are the fusion of histories, heritage, gossip, tales, sentiments, and emotions that are downloaded before moving on.

While his movement across landscapes fuses as imagery, key motifs and text are their punctuation – constants that are repeated and refined. Spatially they connect the pages, strung together through the linear gesture of written text, or indeed as objects refuse to be confined within a single page. Often Jumaadi uses the poems of TS Eliot, love letters, or the songs and lullaby’s sung as a child, the phonetic rhythm of the words in sync with the landscape. Translation has become abstracted.

“I like the sound of text. Often I quote fragments from books of poems that I carry with me, or from internet; sometimes they are my own poems or collaborations. Whether written in bahasa or English it’s not important anymore.” – Jumaadi 2011

In the same way Jumaadi’s landscapes, whether figurative or minimal, are punctuated with familiar motifs: a leaf, a cloud, rain, a tree, lovers, string, shorts and shirt. Their non-linear manuscript are largely autobiographical and connect with oral histories and his cultural roots, and yet they act as a kind of compass across Jumaadi’s landscapes, easily translated to the viewer’s own realm of understanding. For example, while the leaf alludes to the mangroves of his hometown that is slowly sinking under mud 1., it also points to broader environmental concerns. It is a sentiment extended to the delicate medium of gouache, his use of mulberry and handmade papers, and the decaled edges of the paper, hung floating on the wall, temporal and fragile. The physicality of the work mirrors its metaphorical frame. 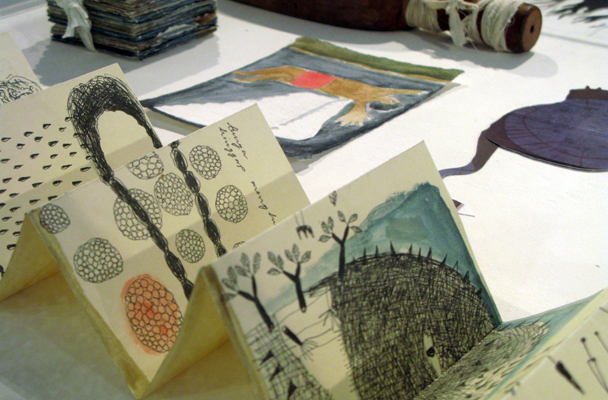 Another motif rain washes this exhibition in torrents. As a symbol it speaks of nourishment for the earth, but also for sorrow, cleansing, renewal and forgiveness. Jumaadi says that he uses himself to measure other people’s condition or emotion, his paintings an extension to another. This layering of self and other, of place and non-place, of reality and sentiment is a little like the shifting characters of rain, from a light drizzle to torrential monsoon, to the precipitator of floods. It is both the landscape of Indonesia and Australia, weighty with light.

“I found those images slowly, one by one, and they found me too”, Jumaadi explains. “I am very comfortable to shift them around and float them as I want. They are my tools to formulate visual poems.”

Artist and academic Michael Downes captured that sentiment superbly, “His tree was the tree, his cloud was the cloud; [but] not any tree or any cloud. And the whole composition was thus anchored in a poetic form where the visualized nouns, adjectives, verbs and adverbs held together as tightly as a sonnet.” 2.

Structure – while appearing loose and spontaneous – is deeply considered. It is a little like the Japanese calligraphic stroke the Ensõ, a circle executed in a single gesture after prolonged meditation and symbolizing strength, enlightenment and elegance. All things come together in an abridged expression.

Considering these motifs, one ponders the small group of drawings with hands and heads severed. Posing the question to Jumaadi he replied, “Somehow its easier or lighter if we travel without our head. Maybe it’s about never perfecting and completing things. Maybe they are about being in pain… to create a tunnel for the world to enter through…a memory.” It is the unexpected in Jumaadi’s work that enchants and ushers us to new ways of seeing the world we share.

As an adult he adds to that visuality of his childhood with the Australian landscape, his home since the ‘90s. In this exhibition the horizon is a very strong element that divides the picture plane. As one living in Australia, there is an ever-presence of an expansive emptiness, captured in Jumaadi’s cathartic repetition of earth and sky. In Asia it is rare to experience that sharpness of horizon, either obstructed by density, pollution or tropical vegetation and thus, landscape has been a genre neglected in contemporary Asian art. Jumaadi reminds us that ‘landscape has the ability to preserve our collective memory. It also locates us in our personal and spiritual relation to landscape.’

While the horizontal line acts as a meter, dancing across these works from left to right, the individual tiles that make up these sparse landscapes have a soft luminosity like the soft edge abstractions of Mark Rothko. They eloquently articulate a ‘presence’; a humanity that we connect with, whether as colourful figurations or ethereal horizons, to his sensitivity material and spatial dialogues. It is this duplicity of the image that liberates them from formulaic genres.

In Indonesia it is a multi-faceted experience, where an individual moves across several forms of creative expression from painting to installation, to performance, puppetry, poetry and music. For TAKSU Jumaadi welcomes us into that tradition – that mode of story-telling – and in that experience allows us to find a place for his narratives here in Malaysia.