Cartoon culture today has taken on a new language of immersion – animation, graffiti, video games, anime and manga, virtual reality and avatars. The popularity of this medium has been driven by our culture and, because we have grown up with these images trained since youth to accept this type of imagery, it is only a natural trajectory that it has ended up in the hallowed halls of our art museums and commercial galleries.

And, yet, historically the comic-strip has always been beyond the realm of the ordinary; working against such structures. Behind its sugary superpower and hyper-real dramatisation there is a residual communication of real issues – power, politics, crime, race, class and gender. For many, the attraction to this form of visual language lies in that very layering of meaning; its simple format a foil.

This exhibition endeavored to juxtapose artists that have been influenced stylistically – but also conceptually – by this global language, moving from the more historically-based popisms of Roy Lichtenstein and his Crying Girl (1963), to the underground cartoon artist MATS!?, for example, working across San Francisco’s streets and alternative publishing dens. 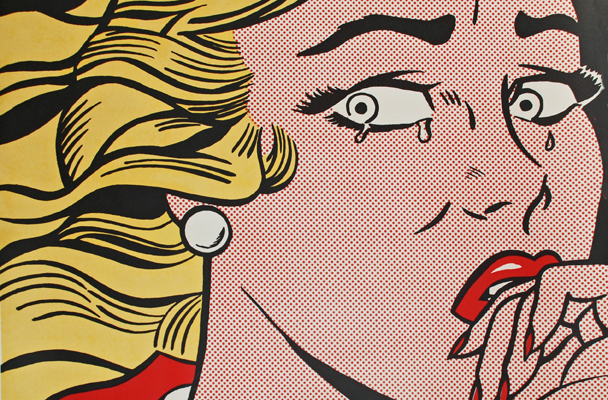 It was the off-beat laced darkness in the work of Dutch artist Vanessa Jane Phaff and Canadian Marcel Dzama that gave birth to the idea for me to do a cartoon show; to unpack the kind of push and pull between high and low culture; emerging and established, and the medium’s universality to a very local San Francisco culture.

As an Australian living and working in the States, the comic’s sugary hyper-real superhero was such an American fabrication. Maybe I was just looking for the lycra-clad super-male? Maybe we all are chasing ideals?

I was, however, curious about how comics had changed in our world? And what kind of community persisted despite opening up this underground scene to digital technology and the internet, not to mention the art market. There has been a shift in audience, moving from the street into cyberspace.

As the SF WEEKLY described the exhibition in a review: “On the roll of Michael Chabon’s Pulitzer Prize winning novel about the comic book industry The Amazing Adventures of Kavalier and Clay to the much hyped summer blockbuster Tomb Raider, based on the addictive Lara Croft video game series – KABOOM!, a group show dedicated to cartoon culture, pays homage to the trend by sampling the mediums diverse forms – including graffiti, animation and video.”

It hinted at the kind of the mainstream peripheral swell that was surrounding comic culture at the time of KABOOM!

It had been my intention to include the school of Japanese artists who drew on the various forms of graphic design, pop culture and American “hyper-culture” fused with a local tradition of anime and manga – not to mention the whole confluence of studio production by artists such as Takashi Murakami, Yoshitomo Nara, Hung Tung Lu, Yoshinori Kanada to name but a few who had only recently been coined with the term “superflat”. The work was in such demand it was impossible to secure for loan for this exhibition.

While this Japanese strand presented an interesting apex where commercial art, cartoons and fine art intersected, rather its current hype threw me back to re-defining the tradition of cartoon history specifically from a local perspective. Afterall, San Francisco has a history of underground comix from the mid 1960s including Robert Crumb’s own Zap Comix, The Print Mint, Rip Off Press, Apex Novelties, and Last Gap. Just like superflat, this local version had a currency (at the time of curating this exhibition), and was not only a scene but a thriving market.

Key to KABOOM!, then, was a reading room within the gallery that contextualized the newer genres against this history, and drew from the archives of Ron Turner’s Last Gasp comix (founded in 1970) and featured rare pieces by R. Pettibon, S. Clay Wilson, R. Williams, and the infamous R. Crumb.

Viewers could sit down and read past and current issues (Last Gasp is still publishing today) set against a backdrop of MATS!? latest edition of his Dr. Dementia series screen-printed directly to the gallery wall. 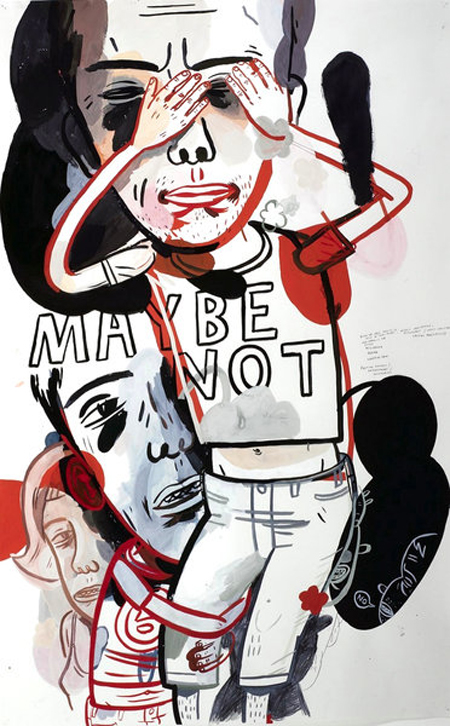 The main gallery, however, took a different tone. While the young San Francisco artist Jason Jagel similarly worked in a more traditional comic form as this earlier generation – as does Glen Baxter with his single-frame barbs – the body of this exhibition referred more conceptually to the medium as a point of departure, such as Amy Ellison’s large encaustic panels (below) that turn to the  stylistic graphic aspect of comics, using them not unlink a graffiti tag.

Some artists opt for a darker view, such as Vanessa Jane Phaff, Marcel Dzama, Kerry James Marshall and Corinne Marchetti, blowing their frames up steroid-sized; while others – such as Henry Darger who was represented with a large horizontal drawing – are as sugary as spun candy.

There is a lot of early twentieth century culture percolating through this fertile imagery – serial westerns, psycho-analysis, big screen cartoons, fantasy (or more appropriately delusional) illustration, to the banality of the weeklies.

The artists invited to show in KABOOM! play within the conventions of comic-strip illustration as a mode of communication, but draw strongly on their own vision of popular culture; the standard rules of behavior do not apply.

I intentionally juxtaposed these individual derivations as a means to begin to understand the sum of the complexities of this media as an artform, and begin to acknowledge the conceptual and psychological space that much of this work engages.